Wright’s Chicken Farm began as a chicken ranch whose proprietor started serving al fresco barbecues. It has since become the biggest of Rhode Island’s several chicken dinner halls, with seats for up to 1,500 eaters at a time and a gift shop that is a bonanza of kitsch. Despite its cavernous accommodations, Wright’s Farm is so popular that a hour’s wait is not uncommon before you actually get a seat.

No, it is not intimate or cozy or anything like Sunday supper at grandma’s, but if you are looking for the best chicken dinner in Rhode Island, maybe the best non-fried chicken anywhere, put this gastronomic Gargantua at the top of your hit list. What’s so good about the chicken itself is that in addition to juicy, fall-apart mouthfuls encased in gossamer skin, there are significant surface areas where the skin has pulled away during roasting and the bare exterior of the meat itself turns firm, becoming chewy, moisture-beaded bark with flavor even more intense than the softer succulent parts within. Along with the chicken come hot rolls, cool salad, macaroni shells with red sauce, and fabulous thick-cut French fries.

All you can eat at Wright’s Chicken Farm

The meal is all-you-can-eat. If ever a bowl is emptied, it gets replaced with a full one. Legend says that one big man came to Wright’s Chicken Farm several years ago and consumed eight whole chickens before deciding dinner was over.

Note #1: Wright’s farm will take reservations for between 10 and 36 people.

Note #2: Hours are seasonable. Wright’s is closed Monday through Wednesday in the winter. 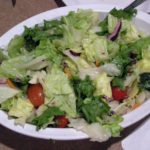 Have been 3 to 4 times a year for 30 years. Was delicious for ever. Around corona virus time everything changed.
They changed the dinner rolls not for the hood. The sauce for the shells has also been chanced and now has little taste and is watery.
Went today 4-2-22. Now they have destroys the one thing that built the business itself.
The chicken. Was shocked when the server delivered mini half chickens that the wings still attached.
The chicken was horribly dry and full of bones.
Has to use the sauce from the shells to get it down. The amount of small bones was ridiculous.
Extremely disappointed. Not sure if this to an attempt to control cost of product in an effort as to not raise prices but it was defiantly a huge mistake.
First the rolls, then the sauce now the ultimate mistake now the chicken.
It’s not even close to the way it was. It’s a little better than average now. Not sure if it’s worth the drive from Connecticut anymore. Very sorry to see this happen to a restaurant that had been part of our life for years.

Absolutely horrible. We got herded about like cattle and were seated in what was basically a noisy, crowded mess barracks after a 45-minute wait in line (which we got through by purchasing some overpriced, watered down drinks). The chicken was incredibly visually unappealing (like mother-in-law-who-is-infamous-for-unevenly-cooking-meat unappealing), and the salad looked like a limp version of a pre-packaged Dole iceberg salad, drowning in Italian dressing. The lukewarm pasta shells were doused in a tasteless, low-end, commercially prepared red sauce. Points for leaving the skins on the fries and cutting them thick, but they were soggy from having been heaped in a big bowl (and probably left sitting around for a few minutes in the kitchen until they got carried to our table). Wouldn’t have minded the wait and the lack of ambience if Wright’s had delivered on the food, but this was a complete bust. Later on, when we mentioned to some locals just across the border in CT where we had eaten, they laughed and said had we asked them, they would have recommended we take a pass on this place. 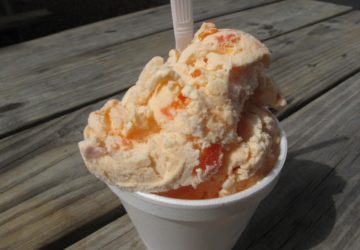 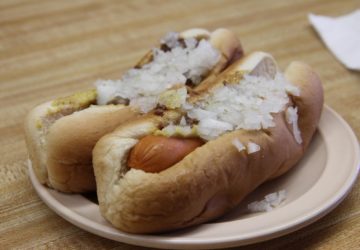