The potato is the most versatile of vegetables. It can be as lowly as fast-food fries or as swanky as tourné potatoes to accompany chateaubriand. A vintage menu from Musso and Frank (Hollywood’s oldest restaurant, since 1919) lists ten different ways a customer can order them: boiled new, candied sweet, French fried, mashed, julienne, lyonnaise, hash browns, cottage fried, baked, and au gratin. Then, too, there are chips, curly fries and potato tornadoes, potato pancakes, riced potatoes, potato dumplings, potatoes O’Brien, and potato skins. Potatoes are such an all-purpose food that many restaurants serve nothing but them – baked and loaded with everything from ham and cheese to barbecued meats to steamed lobster with eel sauce (at the Big Potato Company of Greenville, Alabama). At Idaho’s Boise Fry Company, you choose from among a half-dozen different varieties of potato and specify exactly how you want them cut before frying: shoestring, extra thick, curly, regular, or po’ball. Unique regional potato dishes are vinegar-charged German potato salad in the fried-chicken restaurants of Pittsburg, Kansas; salt potatoes (brine-boiled) around Syracuse, New York; potato-topped pizza in New Haven, jo-jo potatoes (fried right along with chicken) in the Northwest; and funeral potatoes (a cheesy, creamy casserole topped with corn flakes) in Idaho. 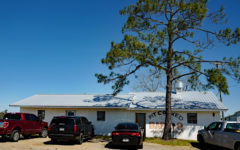