It is unlikely you will never accidentally drive by Keaton’s, located as it is on Woodleaf Road far from the town of Statesville. That’s why we are forever grateful to Harrell Powell, the Roadfood tipster who wrote us many years ago to say that Keaton’s was so good that it was well worth a special trip, so good that it made him cry for joy.

We asked around town and found Keaton’s quickly. All the locals know where it is, for it has become a chicken-eating institution since opening in 1953. It looks great … which is to say that by Roadfood standards it looks great: a weather-beaten shack by the side of the road that could be a truck stop or a honky tonk.

Every evening from Wednesday through Saturday, Keaton’s rough-paved parking lot attracts customers who come to eat here or to take home what is surely some of the best chicken anywhere. The menu calls it barbecued, which it is, sort of, but it is also fried. In fact, what happens is that it is first fried to a crisp then momentarily immersed in a bubbling cauldron of founder B.W. Keaton’s fire-hot barbecue sauce. The hot sauce penetrates the crust and meat of the chicken and caramelizes all around its outside edges, resulting in pieces of chicken that are hot, sweet, and savory all at once: a culinary sensation.

Service is basic. Step up to the counter and order an upper or a lower (the polite country terms for breast or thigh), a half or whole. Pick side dishes from a soulful repertoire of mac & cheese, baked beans, hot-sauce slaw or white-mayo slaw, choose ice tea (sweet, of course) or beer, then go to your assigned table or booth, to which a waitress brings the food, which comes on a plate under a sheet of wax paper. Pull back the paper and inhale: no perfume is so intoxicating.

Note that Keaton’s is open only Wednesday through Saturday. Call-in, take-out orders are welcome. As of Spring, 2020, dining-in facilities are temporarily closed. 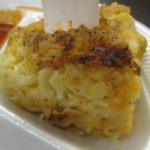 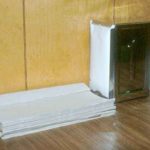 A friend and I ate at Keaton’s for lunch en (a circuitous) route from Winston-Salem to Charlotte. The restaurant sits near the top of a hill on a windy road in the middle of nowhere. It looks abandoned from the outside — like it went out of business ca. 1972 and has been neglected ever since. No windows. Rusty old Coca-Cola store sign on the roof. Giant hand-painted signs around the parking lot and driveway with messages such as “NO LOG TRUCKS.” I wasn’t entirely sure it was open until I got inside, despite the cars in the dirt parking lot.

We didn’t know the drill, but figured out that you were supposed to order at the counter, then sit down at a table to wait for your food. It took a minute for us to get our bearings, check out the menu. “I’ll take one of everything,” my friend joked. The guy taking our order didn’t crack a smile. A sign on the wall behind him read, “No photo’s of the employee’s.” Some guys in winter hunting gear were waiting for takeout. My friend was having trouble making up his mind, so I jumped in and ordered a leg-and-thigh chicken plate. I was adding mac & cheese to my chicken order when the guy interrupted and said, “Slaw?” Uh, yeah, slaw. “Spicy slaw?” Uh, no, mild slaw. “So you want white slaw?” Yeah, I guess I do.

They gave us a tray with our drinks, including a pitcher of sweet tea for instant refills. We sat down in the dining room. The walls were fake wood paneling. On the wall next to our booth they had nailed up about eight full-length mirrors sideways to create sort of a fake window and reflect some light back into the room. After a few minutes the guy who took our order came out from the kitchen and mumbled something. He was approximately 30 yards away, and I didn’t really hear him. A minute later, he walked over with trays of food. “I guess y’all didn’t hear me call your number.” I guess not.

My plate didn’t have any mac & cheese — but I did get my white slaw. Once I removed the wax paper (with “hot” written on mine and “mild” written on my friend’s), the chicken was everything it was cracked up to be — crispy, moist, and incredibly flavorful. If mine was actually the “hot” style, it was very much on the mild end of the heat scale. The slaw was creamy with medium-sized pieces of cabbage. The tea was sweet and freshly brewed. A plain hamburger bun accompanied the meal.

After I ate I walked back to the counter to see about dessert. A hand-written sign listed several desserts available that day, including sweet-potato pie and Keaton’s acclaimed red velvet cake. Unfortunately, the guy behind the counter said all they actually had was coconut pie, so I skipped dessert.

It was quite an experience. Keaton’s won’t win any awards for customer service, but the chicken is definitely worth the drive.

What can I say? True, you would never find this place without the help of a book like Roadfood, or without knowing a local. That would be an incredible loss.

I would hardly call this a BBQ joint. It’s more like a place for the best chicken I have ever eaten (is that hyperbole?). So good, in fact, that we went back a week later on our drive back to NYC. Not paying attention, we got there two hours before they opened, so we drove around to kill time. Trust me, there’s not a lot to do for two hours (but we did find Jay Bee’s Hot Dog on Rte. 64 which was pretty darn good for a pre-dinner snack). But it was worth it. Finger licking good chicken, and I can’t wait to get back.

Thirty years ago, I lived and worked in close proximity to Keaton’s, and ate there regularly. After moving to New England, I found I really missed that unique BBQ burn. We made sure that we ate at Keaton’s on every return trip to the Carolinas. The elder Mr. Keaton was a wonderful gentleman with a great sense of humor. He cooked for his customers and was aware of their preferences. We are so pleased that his heirs are continuing this fine Southern tradition. My wife and I had our first serious date at Keaton’s and we still consider it a treat to eat there.

This, without question, is the finest BBQ chicken that the good Lord has ever allowed me to taste! The taste is hot (I call it two-beer-hot), but not too much so. The elder Mr. Keaton used to say, “It’s too hot for the children today”. It gives your mouth an afterglow. The chicken is always tender. I prefer mine a little crispy on the outside (if it’s not a little crispy, just ask and they will crisp it up for you).

At one time you were served on a sheet of paper, with mini-beer bottles for salt and pepper shakers. The rest rooms were in the rear of the building. Today, you are still served on disposable paper and plastic products, but service now includes a paper plate, and there are store bought salt and pepper shakers. Nonetheless, the taste and country charm is still there. This chicken is always “5 stars”, in my opinion. 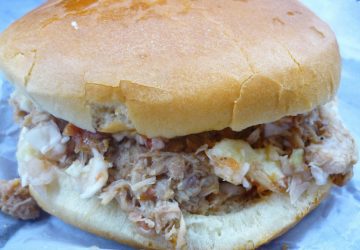 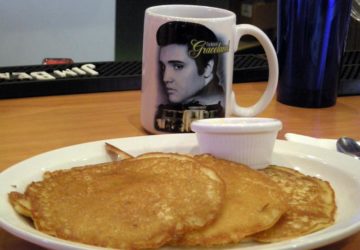