Lexington, North Carolina, is to hog barbecue what Lockhart, Texas, is to beef: a Mecca that attracts pilgrims from around the nation and the world. Lexington’s best is appropriately named Lexington Barbecue #1, and there are many aficionados who consider its slow-cooked pork shoulder to be the definitive barbecue not just of Lexington or of North Carolina, but of our solar system. (In 1983 the North Carolina General Assembly designated Lexington as the “Hickory-Cooked Barbecue Capital of Piedmont North Carolina.”)

“Monk’s Place,” as locals know it (in deference to founder Wayne “Honey” Monk), looks like a barn with a line of smelters attached to the back. From those smelters issues the aroma of burning hickory and oak wood and the sweet smell of slow-cooking pork, one of the most appetite-inducing aromas in the world. No complicated techniques or secret sauces are used in the cooking process. The shoulders simply loll in smoke for hours, becoming ambrosial. It can be sliced or chunked, or, for sandwiches, hacked into a hash punctuated by chewy shreds of bark from the outside of the shoulder. The hacked meat gets only enough sauce to coax out full flavor and is served on a bun with slaw or in a small yellow cardboard boat with slaw in the other half or on a plate. For those in search of a more dramatic chew, sliced barbecue provides big sections of chewy  bark, and an order of skin delivers nothing but crunch and flavor. Like the meats, Lexington’s slaw is judiciously informed by a vinegar/sweet red barbecue sauce. The slaw-and-pork’s perfect partner is a portion of crunch-crusted hushpuppies with creamy insides.

Honey Monk’s is a straightforward eatery with booths and tables. Much business is take out — by the sandwich, or in multi-pound portions for parties at home. When we visited one day before Christmas at 10am, every seat in the place was empty but the parking lot was full, and at the counter inside, controlled pandemonium reigned as crowds of barbecue lovers received the pounds of meat, quarts of slaw and scores of hushpuppies they were taking home for holiday eats. Chopped Barbecue
Must-Try
A majority of customers get their barbecue chopped, and this is what goes into sandwiches. It is moist and big-flavored. Sliced Barbecue
Must-Try
My new favorite way to get barbecue at Lexington #1: sliced. This provides the full range of texture, from velvet soft to chewy and crunchy, all of it radiant with smoke-swine flavor. Skin Sandwich
Must-Try
There is a lot of crunch to this sandwich of pigskin, the savory luxury of which is so well-balanced by a layer of barbecue slaw. 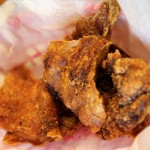 Skin
Must-Try
What a munchie! Crisp pig skin will give your jaw a good workout. Once crushed by teeth, it seems to melt into a slurry of pure pork flavor on the tongue.
Barbecue Tray Cole Slaw
A close-up of the vinegary coleslaw. 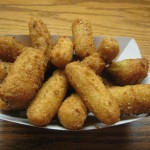 Hush Puppies
The hush puppies here have a very crunchy exterior, with a soft, creamy inside. 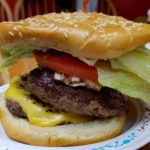 Cheeseburger
BBQ rules here, but Lexington's burger is also wonderful, the crusty patties so well complemented by house made cole slaw among the condiments.