Carver’s is a big farm stand and restaurant in the hills of eastern Tennessee just north of Great Smoky Mountains National Park. A produce barn adjoining the restaurant is a virtual education in apples. All kinds of local apples are for sale; and there’s a big board on which dozens of different varieties are listed, organized by the season in which they are ready to pick.

One small room to the side of the produce area is devoted to apple pies. They are fried apple pies: single-serving crescents of pastry loaded with mashed-up apples the consistency of rugged applesauce. Presented warm, they’re a delight to hold and fun to eat. They’re easy to eat out of hand while on the stroll, but if you are planning to sit at one of the available tables, ice cream is available to top the pie.

The restaurant is a huge place, ready for hordes of tourists, and with a kitchen aimed at all members of the family. The repertoire ranges from bacon and eggs in the morning and grilled cheese at lunch to country ham, four-vegetable plates, chicken pot pie, and apple cider pork BBQ.

The best thing to eat comes with almost every meal: apple fritters. They’re spheres that resemble hushpuppies, but are half the weight, their fried-crisp, golden skin surrounding fluffy dough with a faint fruit flavor. Kettle-hot, with apple butter on the side for dipping, they’re irresistible — an especially good companion for country ham (at breakfast or lunch), which is sliced thick, rank and chewy.

Getting to Carver’s Applehouse is half the fun. Once known as the Moonshine Capital of the World, Cosby remains a place where it’s easy to imagine stills hidden from revenuers in its endless hollers, coves, and valleys. The road to Carver’s is an unspoiled, winding two-lane that could be the route to Brigadoon.

If you are planning to visit Carver’s, call ahead. Hours vary with the seasons. Even when the restaurant is closed, though, warm fried pies usually are available. 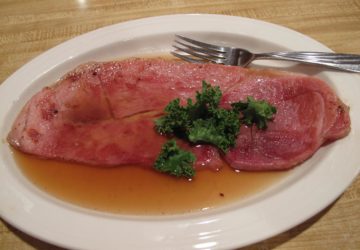