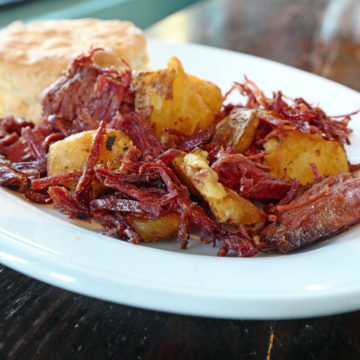 Lunch is served at the Cast Iron Kitchen, but it’s breakfast that draws the crowds. Starting at 7:30 every morning except Monday (when it’s closed), Wilmington hungries flock to this strip mall dining room for eggs and grits, pulled pork hash, fried chicken & waffles, and Smokey Mountain Benedict made with smoked bacon and country ham.

Shrimp and grits are a fine version of the classic, including zesty disks of sausage along with 6 or 12 shrimp (small or large order) in a tomato cream red-eye gravy along with bacon, onions, and mushrooms. It’s a dramatic swirl of flavor and texture, great fun to eat.

Corned beef hash is interesting. It’s made of massive shreds of corned beef and hunks of potato. The beef is tremendously flavorful — good and briny — but it isn’t very juicy. Its curious succulence is reminiscent of southwestern carne seca, paradoxically air-dried and juicy all at once. Cast Iron Skillet’s corned beef isn’t nearly that extreme, but it does have a texture unlike any other version I’ve come across. At first, I shied away, but after a few bites I was gobbling it up right along with its fine cushion of more unctuous potatoes.

Warning: Having been visited by TV’s Guy Fieri, the Cast Iron Kitchen can be overwhelmed by his followers. Unless you come at an off-hour, expect to wait for a table … even if you’ve made reservations.