J.P. Spoonem’s makes iconoclastic cornmeal jonnycakes. For one thing, they list jonnycakes on the menu as Johnny Cakes. For another, they make these alleged jonnycakes with yellow corn meal instead of the traditional white. Furthermore, they faintly flavor them with maple syrup. In other words, these Rhode Island pancakes are not for the jonnycake purist. On the other hand, if you seek a really good breakfast or brunch and are willing to accept a variation on the theme (or don’t give a hoot about jonnycakes), put J.P. Spoonem’s on your Rhode Island eating itinerary. It’s a dandy place to eat.

This kitchen makes west-of-Narragansett Bay-style cornmeal jonnycakes. That means they are relatively thick, dense, and griddle-cooked until the edges are crisp. You need to apply some pressure with knife or fork’s edge to sever a bite. And they are flavorful enough in their own right that you’ll want only minimal butter and/or syrup. They are buff enough to be an entree and to star in a Johnny Cake platter. The platter gets you a pair of them with Swiss cheese and very good ham, accompanied by home fries and fruit.

While its ambiance is casual and diner-like, Spoonem’s décor has a modern edge (like the menu). A tiny-tile floor surrounds a U-shaped counter with chrome-pedestal stools. It makes me think of a vintage hash house reborn in the 21st century. When we think of breakfast in Rhode Island, our thoughts naturally turn to jonnycakes, and our favorites are from Jigger’s Diner in East Greenwich, which has endured a lion’s share of business woes over the years. After it closed for the umpteenth time, WanderingJew and I planned a jonnycake tour of Rhode Island to find other worthy candidates. After sampling many of the sundry cornmeal cakes across the Ocean State, our top pick of the day was the Johnny Cake (two words!) Platter at J.P. Spoonem’s in downtown Cranston. Two johnny cakes are layered with thick, hand-carved ham and melted Swiss cheese. Homefries and fresh fruit came on the side.

This kitchen uses yellow cornmeal as opposed to the traditional white variety (hence the variant spelling of jonnycake with an “h”), and their johnny cakes taste slightly of maple syrup, despite the very light sprinkling of powered sugar on top. The texture reminded us of moist cornbread, and the distinctive taste was complemented by the mildly salty ham and cheese. The homefries were the soft, uncrusty kind, the flavor waking up with a dash of pepper. On our next visit, we’d like to try the award-winning corned beef hash, their creative eggs Benedicts and an Italian-inspired dish called Eggs Carbonara. J.P. Spoonem’s is open Monday through Friday, 7:30 a.m.-2 p.m. (serving breakfast all day, lunch after 11 a.m.); Saturday, 7 a.m.-2 p.m.; and Sunday, 8 a.m.-1 p.m. (serving breakfast only). Be advised that payment is cash only! 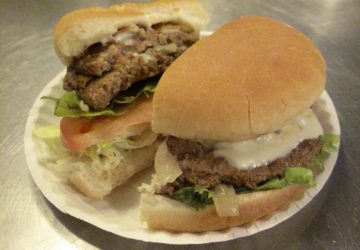