Ezell himself was on hand behind the counter the day I stopped in to his restaurant at 23rd Avenue and East Jefferson, and he looked to be a man who enjoys life. And why shouldn’t he? Starting at this location in 1984, he has expanded to over a dozen Famous Chicken restaurants in the Puget Sound area, and has become a conspicuous success. While not indigenous to Seattle (Ezell brought the recipe from Texas), his fried chicken has become one of the city’s Roadfood highlights, not to be missed by anyone on a chicken-eating tour around the country.

It is a curious bird, not as juicy as most great chickens. It doesn’t drip or ooze. But the flavor is packed into the meat, which is tender and moist and completely satisfying; and the thin case of crust, with which each piece is liberally endowed, is melting-rich. When you order your food at the counter — white or dark, by the piece, as dinner or snack pack or family pack — you will be asked if you want it traditional. Not a bad choice, but I say spicy is better. It is bright and zesty but not Nashville-chicken-hot. Beans are thick and substantial, slaw is crisp, soft rolls are yeasty-sweet, and mashed potatoes are the real deal. Peach cobbler is good and buttery.

All business is take-out. 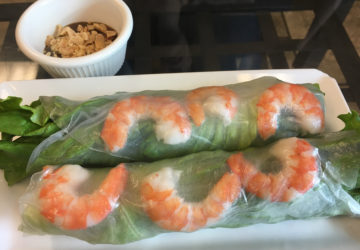