Barbecue slaw, which adds sauce to the familiar chopped-cabbage salad, is a big deal in this part of North Carolina, but nowhere is it more important than at R.O.’s. Billed as a “sauce, slaw & dip,” the soupy emulsion is so significant a presence in the kitchen’s repertoire that some customers come for a slaw sandwich – a broad, well-toasted bun filled with a thick layer of the stuff and no meat whatsoever. R.O. sauce is a shade darker than coral pink, reminiscent of 1000 Islands dressing (but only vaguely), pickly sweet with enough cayenne pepper zest to rouse taste buds to attention. Is there a hint of pimiento cheese in it?

R.O.’s slaw is bought by customers not only to accompany barbecue or to eat solo, but also as an ingredient in meat loaf and a sauce for cocktail shrimp, as a hamburger condiment and a dip for chips or crudités. The recipe dates back to 1946 when Robert Osy Black opened his barbecue restaurant and made his wife Pearl’s specialty condiment part of the menu.

If you are coming to R.O.’s, I would not recommend ordering a slaw sandwich. Not that it’s bad, but it would be wrong not to have the slaw in concert with R.O.’s barbecued pork, which some of the best anywhere. Cooked the old fashioned way with hickory smoke, the pale meat is creamy and rich and so moist that no sauce is necessary; but oh, what a great companions these two elements are. The pork is available sliced or chopped; the latter is more fun, although the slices are tenderness incarnate.

Ice tea and soda are sold in 16, 24, and 32 ounce tumblers, but if you really want to go local, have the R.O.’s specialty, Cherry-Lemon Sun Drop. It’s something like a cross between Mountain Dew and Hawaiian Punch.

Aside from good food and drink, R.O.’s is memorable because it is such a grand, well-weathered place. It is casual in the extreme – what Yankees would call “eat in the rough”: order at the counter and fetch your own tray when your number is called. But the dining room to which you take the tray (after stocking up on napkins at a service bar) is quite civilized. Décor includes potted plants, wallpaper of which a Victorian grandmother would approve, complete with fancy border all around the top, and a hushed, reverent room tone that is the mark of so many great barbecue parlors.

Since 1946, R.O.’s Bar-B-Cue has been a household name in greater Gastonia, thanks to their famous spicy barbecue coleslaw. This tasty condiment not only tops R.O.’s tender pork barbecue sandwiches but is also sold by the tub as a savory dip for chips and crackers. Back in the ’40s, Robert Osy “R.O.” Black’s wife, Pearl, developed her own recipe for this mouthwatering slaw and made it with a hand grater in her kitchen. Demand for their “sauce, slaw & dip” became so high in recent times that the third-generation family owners built a production facility across the street from their original restaurant, located midtown at the edge of a quiet neighborhood.

R.O.’s specializes in three of our favorite Southern delicacies (pimento cheese, BBQ, and Cherry-Lemon Sun-Drop), so we began with a grilled sandwich with their homemade pimento cheese. Also available in local grocery stores, this semi-spicy cheese is delicious right out of the fridge, but when melted, it attains a new taste level altogether. Thinly spread on regular white sandwich bread, grilled until light brown, and wrapped in wax paper, this was a mere appetizer to our main course of BBQ.

Though they do offer it sliced, we chose minced in the BBQ plate. Boasting enough meat for two sandwiches, the pork is finely minced, almost ground, with a tinge of smoke flavor. Its inevitable dryness begs to be complemented by the spicy slaw, which helps to hold the meat together on the two buns provided. These brown-topped rolls are pressed flat on the grill, so that every bite has a wonderful crunch. A scattering of both onion rings and fries, plus a small tub of mild baked beans, rounded out this meal made for two.

R.O.’s third specialty, and one that reaches further across area counties and over the line into South Carolina, is their homemade Cherry-Lemon Sun-Drop. Tasting like a more citrus-y Mountain Dew, Sun-Drop is a delicious soda bottled in the South, and R.O.’s mixes it with another Southern favorite, Cheerwine cherry soda (while others use cherry syrup), and serves it with a squeezed lemon wedge. The iced tea is also very good and not too sweet.

R.O.’s remains one of the few places in this corner of the state that offers curb service. On our visit, we hadn’t even pulled into a parking space before a teenaged hop waved at us, asking if we wanted to order outside. We pointed to the front door, indicating that we were heading for the dining room. After eating, we picked up pint tubs of pimiento cheese and slaw (the latter does come in gallon containers) to take home. 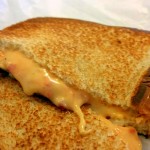 Cherry-Lemon Sun-Drop
Must-Try
Cherry Lemon Sun Drop was introduced by Procter & Gamble in 1985, but R.O.'s makes its own, using plenty of Cheerwine. 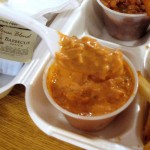 Sauce, Slaw & Dip
Must-Try
This chunky, spicy slaw serves as the savory adhesive that keeps a minced barbecue sandwich together. No matter how delicious it may be, cole slaw always plays second fiddle. When visiting barbecue parlors in North Carolina, the curious eater will encounter a handful of slaws that test that rule. Not that they overshadow the pork they accompany, but they can be truly memorable. We wouldn't expect anyone to tour the Tarheel…