Baked dough filled with mashed potatoes or buckwheat groats, the knish is a traditional Jewish dumpling that can be so dense and heavy that it has long been the butt of jokes regarding home-cooking-induced indigestion. In addition to being made by Jewish mothers, knishes used to be a familiar offering from street carts on New York’s Lower East Side. In the early 21st century, knishes have gained new fans in re-imagined delis such as Perly’s of Richmond, Virginia, where the menu includes a corned beef knish and a vegetable knish of broccoli and potatoes smothered in cheese sauce. 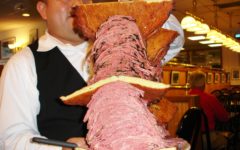