At Woodside Farm Creamery, ice cream is all about the cows. A small herd of thirty Jerseys is moved to a fresh field every day after their morning milking, giving them plush green grass to eat and allowing previous days’ fields of clover, alfalfa, orchard, and rye grasses to flourish again. Each produces four to five gallons daily, which, compared to Holstein production, is scant. But farmer Jim Mitchell asserts that milk from a Jersey cow is more nutritious and better tasting. (Holsteins are the black and white bovines; Jerseys are brown, as exemplified by their most famous good-will ambassador, Elsie.)

Woodside Farm’s thick Jersey milk makes magnificent ice cream. As produced in the creamery adjacent to the milking parlor, it is more cream-sweet than sugar-sweet. Low overrun (minimal added air) creates such density that melting makes it more like crème fraiche than spilled milk. The butterfat content is about 15%, varying slightly depending how the cows’ grass is growing, placing it high on the richness scale. But unlike many high-butterfat, superpremium brands that can assume such overwhelming intensity after a scoop or two that you feel like you are gagging on spheres of flavored butter, this stuff tastes positively salubrious. Two or three scoops are no problem; if we lived near New Castle County, we’d come for a cone a day.

Woodside Farm is a particularly nice destination because of its al fresco picnic tables and grassy fields to which some customers bring blankets and box lunch for which ice cream is the grand finale. The view from the tables is of cattle grazing. Nothing like an ice cream shop in a strip mall, this place is pure country. One Response to “Woodside Farm Creamery”

Woodside Farms calls their ice cream “Farm Fresh”, and this is literally true. The ice cream they make and sell is produced from milk provided by the Jersey cows right here on their farm. This ice cream is extraordinarily thick and dense, with an almost chewy texture; not too sweet, and as it warms up it softens rather than melts into a puddle. The milk from the small Jersey cows on this farm is especially rich in butterfat and protein, and the resulting ice cream, no matter which flavor you choose, tastes most of all of dairy richness. This is among the finest ice creams we’ve ever had the pleasure of spooning into, but its creamy intensity might be too overwhelming for daily consumption.

This ice cream shop on a working farm offers interesting seasonal flavors: an October visit turned up Cinnamon Apple Pie and Pumpkin, with or without pecans. The Pumpkin Pecan was amazing; the flavors were true, the toasted pecans were crunchy, and we think it would be perfect in a crust for Thanksgiving (but unfortunately Woodside closes for the season at the end of October). The great Fluffer Nutter combines peanut butter ice cream with swirls of Fluff. You can find Woodside Farms ice cream here and there around Delaware and Pennsylvania, and they make special flavors for some of these locations, and for special events: you might find mushroom ice cream at the Kennett Square mushroom fest, for instance.

Their website has some fascinating information on dairy farming; it’s worth checking out. Although the Mitchell family has been making ice cream only since 1998, the Hockessin farm goes back to the late 18th century. Today, this suburb of Wilmington is thoroughly developed, but you’d never know it as you gaze upon a field of cows while licking a cone in this bucolic setting. 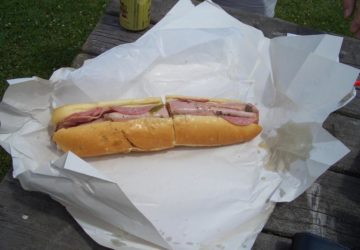 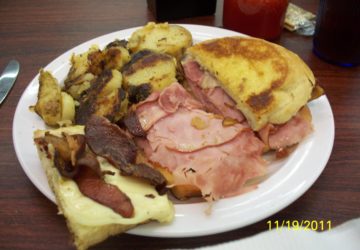