Who says all of the great Italian bakeries and delis are in urban Italian boroughs like Boston’s North End? On Gloucester’s narrow Main Street near the fishing piers, Virgilio’s Bakery & Deli, a small grocery store with a well-aged patina, makes one of the great unique Italian sandwiches in the U.S.

Virgilio’s is the sort of versatile place we wish we lived near. It’s there for coffee breaks, take-out lunches, catered dinners, and Italian groceries. The family has been in the grocery business in Gloucester since 1934, and has operated their current location since 1953. In 1961 they began baking bread.

Virgilio’s is famous for a firm white bread that they call “the bread of the fisherman.” The highest expression of their bread baking is the “Saint Joseph Roll”, these are large, sesame-seeded and harder than classic Italian sandwich rolls. They are something like denser kaiser rolls with memory foam within, but with a firm shell that helps resist sandwich sogginess. Virgilio’s bakes these rolls, along with submarines loaves, cookies and pastries throughout the day.

The Saint Joseph is the signature sandwich. Stacking two types of bologna and two types of soft salami, it’s a relic from golden age of pink lunch meats. Spiced meats and sharp provolone are contrasted by vinegar (and marinated hot peppers added on at our request). The Saint Joseph sandwich tastes intentionally designed for the rolls of the same name. Big flavors demand a big roll.

Another Virgilio’s specialty is mudiga steak — thin steak cutlets. It is, in fact, a favorite of Gloucester, where several other restaurants serve versions. These “steaks” are much more delicate than a chicken fried steak. They are almost brittle and easy to bite through. Their texture is more like eggplant parmesan than schnitzel. Several sandwiches feature mudiga steak. We loved mudiga steak parmesan, which features tangy red sauce and melted sharp provolone.

Among other sandwich options is homemade meatloaf, which comes thickly cut. You can have it with hoagie fixings, as a parmesan, or with just a squirt of ketchup. We asked for it with just some marinara sauce, as we didn’t want to overpower the meatloaf. The loaf itself is soft and well seasoned with Italian bread crumb dry herbs. Upon reflection, we realized that some aged provolone would have added a missing pungency. Next time we’d get it as a parmesan.

The best thing that isn’t stuffed into bread at Vigrilio’s are lobster tails. Lobster tail pastries, that is. These staples of Italian-American bakeries are the same as the Neapolitan treat Sfogliatella. In New England they call them lobster tails because of their physical resemblance to the region’s favorite crustaceal appendage. The lobster tails at Viriglio’s are known for their double thick Italian custard rather than ordinary pastry cream. They are very flaky and the glossy cream does indeed make them stand out. 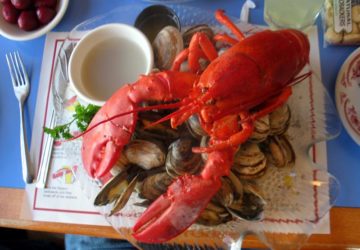 By Jane And Michael Stern Originally Published 1995 Gourmet Magazine I am a semi-retired plumber, but I’ve dug clams all my life,” says Tom Marr, the cook at Farnham’s...