Without actively searching for it, we recently found some of the best non-regional Roadfood in Boston. Trina’s Starlite Lounge, known simply as the Starlite by regulars, is an extremely nondescript black building in Inman Square, where Prospect Street changes names to Beacon. Its Miller High Life sign recalls a small-town American Legion hall, the type of place you’d walk by a hundred times and never give it a second thought. Half lounge, half restaurant, you’re likely to be treated to rowdy renditions of the Happy Birthday song from the bar side of the building while chowing down on your meal, but this is a major part of the Starlite’s neighborhood charm.

What should I eat at Trina’s Starlite Lounge?

Three menu items immediately caught our eyes as being regionally appropriate in other states: the pepperoni roll (West Virginia), fried chicken & waffles (Southern states), and a Cuban sandwich (Florida). Our server, Camille, was an absolute expert in explaining the chef’s twists on tradition of our choices.

For starters, the pepperoni roll is a perennial favorite with locals, and for good reason: the combination of meat, cheese, and upscale-bakery-quality bread is amazing on its own, but the red sauce steps it up more than a few notches. Chunky tomatoes and a peppery kick had us ladling it all over the roll like strung-out pizza addicts. Camille didn’t have to tell us that folks go crazy over the pepperoni rolls, because it is so obvious from the first forkful.

Its moniker reflecting the chef’s hometown, the Cuban de Tallahassee is a triumphant pressed sandwich, oozing with tangy pimento cheese made in house. Both pulled pork and succulent pork loin provide the overall juiciness, with homemade pickles and Tabasco aioli bringing up the rear with a vinegary smack. Again, the crusty bread makes all the difference here, as does the side of excellent cole slaw.

Maybe the chef is old enough to remember Shingles Fried Chicken, which thrived in Tally in the 1990s, because the fried chicken ranks among the best we’ve had anywhere. Bon Appétit Magazine agreed last year when they counted it among “The Top 10 Best Places for Fried Chicken,” though its crust is unlike the typical Southern-fried variety. Savory, herb-crusted skin that’s virtually greaseless locks in the heat for maximum flavor in each tender, juicy bite. Cooked in a thick, Belgian-style iron, the waffle is greatly enhanced by hot pepper syrup. Though we are staunch thin waffle fans, this is easily overlooked, thanks to the spicy/sweet syrup that tastes like liquefied pepper jelly.

We capped this incredible meal at Trina’s Starlite Lounge with a slice of pumpkin-chocolate chip pie with real whipped cream. Not only was this food some of the best we’ve had in Boston, but the service went so above and beyond that we’ll ask for Camille on every return visit. Their Monday-only “industry” brunch is particularly popular and goes way beyond frilly mimosas and heavy egg dishes with homemade Pop Tarts, sweet cornbread, and throwback faves like Tang and Nestle Quik.

The Mac Daddy is one such masterpiece: sausage patties sandwiched between three fluffy pancakes and covered with gravy—this could be the best breakfast in Boston! Trina’s Starlite Lounge is open every day from 5 p.m. to 1 a.m., serving dinner until midnight and brunch on Monday only. 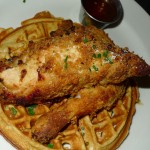 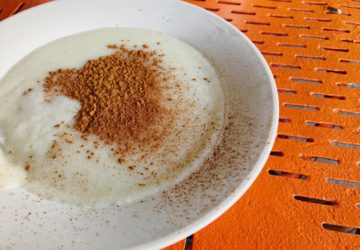