The Breadboard stands out among a fairly competitive breakfast scene in stately Ashland, Oregon. Its supremacy is earned by the unbeatable combo of fluffy buttermilk flapjacks with brambly marionberry jam and whipped butter.

The Breadboard’s quiet location outside of town, safe from the throngs of theater tourists, adds charm. Converted from a gas station, it has now been around for more than three decades. Over the years, it has experimented with an impressive array of daily specials. Some weekend mornings, we just torture ourselves by checking the website to see what we are missing.

The “homers” that come with egg-dishes are gently cooked red potatoes, delicately seasoned. No oily fried spuds here. Omelets also are a cut above. Fluffy eggs given an earthy touch with portobello and button mushrooms in the Magic Mushroom omelet. Perhaps it’s those “magic seasonings” that makes it taste so good.

The Breadboard’s menu really doesn’t miss, but if you’re passing through, prioritize the pancakes and a signature country-style breakfast called The Mountain Man.

The Mountain Man isn’t wildly innovative. It’s what some would call a “Southern Benedict”: a split biscuit topped with a sausage patty, eggs, cheese, and bacon gravy. The biscuit is fluffy and the sausage seasoned with lingering sage, but it’s the bacon gravy that puts it over the top. A popular Oregonian alternative to the classic sausage cream gravies of the South, it is light and herby and not overwhelmingly greasy. It’s heavenly on the “homer” potatoes.

Pancakes are a must. Buttermilk are fluffy, sweet and appealing to most palates. The sinister wild-fermented sourdough cakes are funky, and very much only for hardened fans of the old Yukon style of flapjacks. We’re fans of both, and get often get a short stack of each. Marionberry jam and whipped butter are good dressings either way.

The Breadboard serves great bottomless coffee from the Good Bean in Jacksonville and offers tempting baked goods for road snacking. It is right off I-5, and it is a top choice for a comfortable and tasty recharge halfway down the ten-hour drive between Sacramento and Portland. 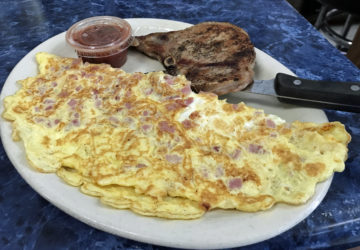 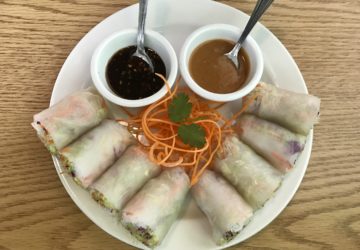