Sophia’s restaurant is urban heartland Roadfood at its finest. It’s a breakfast-and-lunch diner with an old tavern feel (full bar, from 7am) and ambiance that is at that curious intersection of rust-belt muscle and downtown hip. And I don’t say this only because when I visited, the background music was nothing but hard-charging Bob Seger standards.

The breakfast menu is hearty fare for people who plan on burning calories: multi-egg omelets, big burritos, magnificent corned beef hash mixed up with rugged home fries that get all crisp and flavorful on the griddle. “Off the bone” ham is thick, brawny slices with powerful character, so well accompanied by those home fries. On the side, in addition to eggs, one gets toast. Customers are asked if they want it made from white, wheat, rye or homemade bread. I can’t imagine why anyone would not choose homemade; it’s beautiful stuff in its modest way, sliced fairly thin with fresh, farmhouse flavor and an elegant crumb, all the better when brushed with butter.

Many of the omelets have a Greek touch (kalamata olives, feta cheese, spinach); and while I don’t know for a fact that the people who run this place are Greek, there is an easy, polished hospitality about the way customers are dealt with that reminds me of so many Greek-run diners and restaurants. At 7am, a nice waitress named Allison was the only person on duty in the dining room, so as customers began to pour in, cooks came out from the kitchen to help deliver plates — never too busy to have a few friendly words with customers, some of which were regulars, others, like myself, strangers. It’s been a while since I felt so welcomed in a new place,  especially in a place that has such a strong of-the-neighborhood personality. 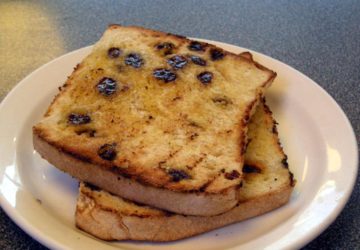