Simply Southern Smokehouse is definitively southern. Its vast buffet is a primer in Dixie delights including the very local signature dish, chicken bog. That’s a variant of rice pilau that here contains not only chicken but disks of porky sausage — a hearty meal that sings of coastal Carolina.

Of course, there’s barbecue — good barbecue, pulled into large shreds that are mostly velvet-soft but also include ribbons of chewy and/or crunchy strip from the edge. Buffet-style service means you can select the exact sort of meat you wish.

The problem (oh, what a problem!) is that there are more tempting items along the buffet than any reasonable appetite could handle. Beyond bog and barbecue are melting-crust southern fried chicken, barbecue chicken, chicken & dumplings, baked spaghetti loaded with meat, pork chops, and sausages. Side dishes are a panoply of Dixie faves including collards, tomatoes & okra, rice & gravy, pickled okra, biscuits, cornbread, and (after 5pm only) macaroni & cheese.

Of course there are fruit cobblers and banana pudding for dessert, but the one that makes me swoon is sweet potato casserole. It’s sweet swirl of earthy flavor topped with a super-crunchy, streusel-like crust. 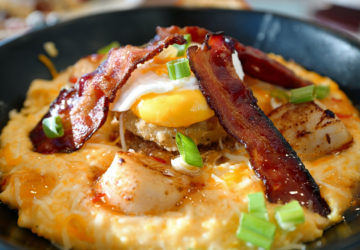