Thanks to the eagle eyes of my foodie pal Dan, we discovered the best—and possibly the only—Salvadorean food in Springfield. Despite its seemingly commercial name, Salsa’s is family-run, completely local, and serves unbelievably scrumptious Mexican and Central American meals. Located just off the “X” (junction of Sumner Avenue, Belmont Avenue/Route 83, and Dickinson Street) near Forest Park, this small café also specializes in Salvadorean fare: pupusas and all the trimmings.

We began our experience by ordering tall glasses of horchata, a Mexican rice drink flavored with cinnamon. If proprietors offer horchata at all, often it’s blended from a powdered mix, which leaves behind a chalky aftertaste on the palate. Salsa’s horchata had a very slight powdery taste but was offset by a sweet, refreshing cinnamon flavor. After poring over the menu, we decided on two Salvadorean ‘platos tipicos’: fried yuca with marinated pork, and a pupusa combination plate with rice, beans, and plantains.

Yuca (also yucca or cassava) is a tuber much like a potato, and Salsa’s serves fried yuca in large chunks alongside savory pork cubes, prepared in a mild pepper marinade. The pork was a little tough around the edges but enhanced by the hot salsa included on the table. The yuca was excitingly starchy and outstanding when augmented by the same salsa, and the sour cream on the side added another level of flavor to both items.

Pupusas are handmade corn tortillas stuffed with cheese, beans, or ground meat, like a Salvadorean grilled cheese. Salsa’s pupusas are thick and served with marinated pink cole slaw and hot salsa as condiments. Our combo plate featured two pupusas (one cheese, the other ‘revuelta,’ ground pork and cheese), savory frijoles, and white rice topped with a fried egg, the latter of which was reminiscent of the Hawaiian ‘loco moco’ plate lunch. The pupusas’ tender insides of cheese and pork complemented their crunchy crust, and the thin-sliced fried plantains were also quite delicious.

Other menu items for return trips include huevos con chorizo, flautas, chicken plates, and the usual Mexican selection of tacos, enchiladas, burritos, and quesadillas. The décor of Salvadorean flags, plaques, and misspelled Spanish signs only adds to the charm of this Roadfood discovery. Good Hispanic food has always been hard to come by in New England, but Salsa’s offers a cut way above the rest in Western Massachusetts. Thank you I have updated the restaurant to show that it is permanently closed. 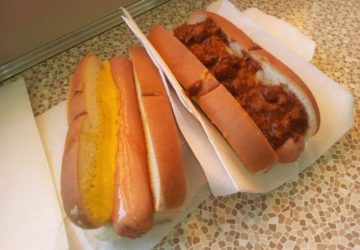