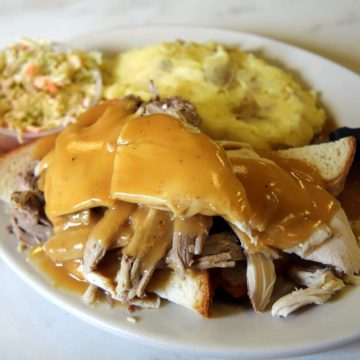 When we sought suggestions of good places to eat in Northern Vermont, we got a beaut from Alice Levitt, who was then senior food writer at Seven Days newspaper in Burlington. Alice recommended the Parkway Diner for “the only old-fashioned, traditional diner food in the state that I wholeheartedly endorse.” In particular she praised the hot turkey sandwich, saying it is “as good as it gets.”

Being fans of excellent hot turkey sandwiches, it didn’t take Jane and me long to find the mid 20th century Worcester Lunch Car Company Diner, where we secured seats in a handsome leather-and-mahogany booth and ordered one. We were soon ooing and ahhing over what truly is an ideal diner-style hot turkey sandwich. By diner-style, I mean that you would not mistake this magnificent plate of food for home cooking. It isn’t homey at all; it is in some way better than that: a masterful mix of succulent dark and tender white meat freshly carved from the bird, shreds and slices intertwined, glazed with gravy and perched atop absorbent white bread, accompanied by chunky mashed potatoes and sweet cole slaw. Only in a diner would you find a plate of food so perfect. Only in a GREAT diner.

Alice also recommended an item called the VT burger. This too is a benchmark. A juicy round of hand-pattied beef, medium rare as ordered, shares space on a high-quality brioche bun with melted sharp cheddar cheese, smokehouse bacon, thin slices of Granny Smith apple (oh, the crunch!), red onion, sliced tomato, and lettuce. It is a challenge to unhinge one’s jaws enough to get all those strata in a single bite, and oh, what a magnificent combination of tastes and textures they make!

The Parkway is a primeval counter-and-booth dining car including tiny-tile floor, curved roofline, worn Formica counters, silver-chrome everywhere, and even a staff of quick, no-nonsense waitresses. And yet, as evidence that everything here is a cut above standard hash house chow, a moveable letter sign above the counter next to the roster of daily specials lists the local farms and creameries from which the kitchen gets its first-rate provender. By Jane and Michael Stern Originally Published 2000 Gourmet Magazine In New England, doughnuts are an art. We needn’t argue their humble virtues in contrast to such upwardly mobile...