We prefer street food and home-cooked meals to restaurants because they are a personal culinary expression. In these settings, one person prepares all of the ingredients and cooks all of the food. Nothing is lost in the mediation of a kitchen brigade. Experiences like this are hard to come by while you’re on the road, and nearly impossible to find at a cozy barroom with cold beer. The Nine-Eleven Tavern is an exception. Everything is cooked by one man, Mark Gress. If Mark can’t come in, the bar doesn’t serve food. Even Picasso had his assistants help in the studio sometimes. Not Mark.

His wings are considered some of Buffalo’s best. The secrets are Mark’s experienced hand in the kitchen and his confidential sauce. It really is a secret: the bartenders and even his immediate family have no clue what he uses. It’s certainly a nice break from the usual cayenne vinegar sauce and butter that everyone else is serving. There’s a delicate balance of flavors at play. Garlic is the one thing most code crackers agree is in it, but no one really knows. Also, they are fried beautifully, bringing out a nutty flavor in crunchy chicken skin.

Mark’s wings are presented artistically with spears of celery hearts pointing out like hands on a clock and celery leaves planted in blue cheese dressing at the center. Each plate looks like a flower.

Western New York raised, Mark started the bar in 1981, and decided to focus his culinary efforts on wings because they were a point of local fame. He loves doing what he does … but tells us that he hardly ever eats wings! He’s more of a surf and turf guy. That hasn’t stopped him from toiling tirelessly to make better wings for us, his adoring fans.

Since Mark is a one-man show and his place is popular, you might have to wait for the food. It’s worth it. These wings are irreplacable. All famous icons of American cuisine have off days, because no kitchen is perfect. Here, you know Mark is making the wings, which is as close to a guarantee for greatness as you can get.

(It’s important to note that the name of this place comes from its street address. After September 11, 2001, Mark actually considered renaming it, but by that point, he had developed too much of a following to make the change.) 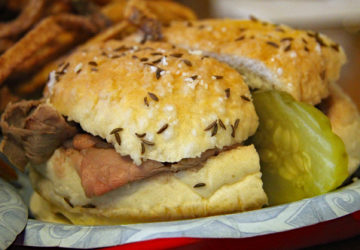 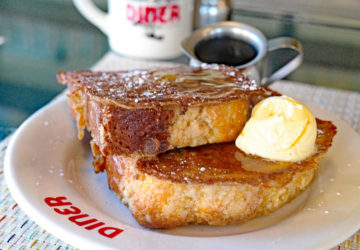