The meal to get at Megallon’s is a chopped pork sandwich with onion rings on the side. Choose between tart North Carolina style and hot-hot sauce. I decided to take a ride today and chose Megallon’s as a destination for lunch, based on the posted review and my love of good ‘cue. After the 160+ mile ride, it took me a few times past to actually spot the restaurant. It’s really small, and shares a building with a used car lot. Those aren’t negatives; I love little hole-in-the-wall places.

The dining room has two tables with four chairs each plus eight or nine stools at the counter. When I was there, three young Navy guys were finishing up lunch at the counter and I grabbed a seat at a table and ordered the “jumbo” sliced pork sandwich, cole slaw, and hush puppies, accompanied by the required (at least by me) sweet tea.

I must admit, I was pretty disappointed. The pork was okay, but nothing more than that and the portion was really meager for something called “jumbo.” The cole slaw was also okay and the hush puppies were pretty decent. The first cup of sweet tea was fine, the second tasted completely different, enough so that I asked if it was actually sweet tea. I tried the “popular” BBQ sauce, but it didn’t add much to the sandwich besides moisture.

For $12 and change, I expect a lot better BBQ than this, and I’ve gotten much better BBQ than this at any number of places in Virginia and beyond. It wasn’t terrible and if I lived in the neighborhood, I’d probably try it again in case I hit it on a bad day. But in retrospect, I wish I had tried the Bel-Aire Diner just down the street instead…

I have spent many years visiting the Tidewater area and have been largely disappointed by the barbecue. North Carolina, Tennessee, and Texas have barbecue identities that are rock solid. Even South Carolina’s mustard sauce and Alabama’s white barbecue sauce smack of regionalism. But Virginia? Nothing. However, on a recommendation from my wife’s sister’s boyfriend’s brother, I made the 40 minute drive to Little Creek and Azalea Garden roads, to a tiny restaurant with two four-person tables and eight barstools.

To me, the essence of Roadfood is a combination of the food and the people, and Megallon’s excels on both counts. The pork is chopped, served with slaw and a choice of two tangy, vinegary sauces. One is Carolina-style, very heavy on the vinegar. The other is mouth-puckering and slightly hot. Both are wonderful. The deep-fried sides (fries and onion rings) are as they should be, and on the day I was there, a huge vat of collards were on the stove for all to share. I didn’t have any ribs, but the couple next to me were enjoying a rack, and they looked delicious.

As for the people, Don, the owner, was clearly a man who liked his barbecue. He’s been perfecting his barbecue for 40 years, but has only been in the restaurant business for 12. You can tell that he takes satisfaction in each diner’s enjoyment of his food. However, the experience I had was one of those heart-warming moments that makes you love the small mom & pop places. They don’t take credit cards, and my wife had pilfered a twenty from my wallet before I left. I didn’t have enough cash for lunch! I told Don that I would go find an ATM so I could pay him and he told me to sit tight, enjoy my lunch, and pay him later. “You don’t want to be running around before you eat. This ain’t McDonald’s — it’s my place, and if I say so, you can come by and pay me later.” My daughter was having the chicken tender kids meal (straight from the fryolator) and he asked if she wanted ranch — she asked for honey mustard. “Don’t have that, but I can make you some” — and in five minutes, she had freshly made honey mustard. McDonald’s this is not! 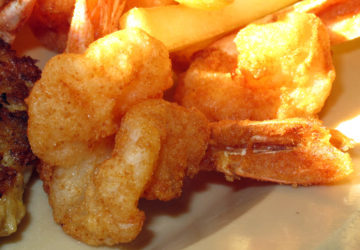