The small town of Pella is known for a large number of products, from high-quality windows and beautiful tulips to oversize pastries baked in the form of the alphabet (“Dutch letters”). One of the most delicious Pella specialties is ring bologna, a taut tube of salami-type meat curled into the shape of a horseshoe, smoked and cured and ready to slice, to be eaten cold as a snack or hot as a meal.

In’t Veld is a full-service meat market on the town square that makes its own ring bologna, as well as dried beef and bratwurst. Most customers come to buy meat for home – ham, turkey, fresh-ground hamburger – but for those of us just passing through, In’t Veld offers a menu of sandwiches that can be eaten here (or taken on a picnic). Among them are a hot ring bologna sandwich and, better yet, a bologna Reuben, which piles sauerkraut, Swiss cheese, and sweet dressing atop the discs of bologna inside a couple of slabs of rye bread. The sandwich menu also lists dried beef (hot or cold), hamburgers and pizza burgers, and an excellent “Double Dutch,” which is five large pieces of warm Pella bologna with slices of partially-melted Gouda cheese on a good bakery bun. 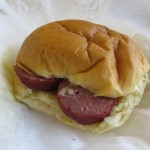 Canteen Lunch in the Alley | Iowa Loosemeats and Pie