A short while back when I posted a list of a dozen essential Roadfood eateries in Chicago, I was called on the carpet for not including Fat Johnnie’s. Mea culpa! No one can say they’ve had a full taste of the Windy City at its raunchy best unless they’ve chomped into a Mother-in-Law at Fat Johnnie’s.

Curiously, despite the hegemony of hot dogs (or, as they’re known hereabouts, red hots) in Chicago, the Mother-in-Law is not a hot dog. It is a tamale, a  tamale nestled in a poppy-seed bun just like a hot dog and fully dressed with chili, onions, plenty of hot sport peppers, and maybe a few tomato slices and crisp cucumber slices and relish. While the tamale itself is no big deal, in concert with all the other ingredients it’s the basis of a street-food symphony.

But of course, there are hot dogs, and you can have one fully and beautifully dressed (or overdressed?) the Chicago way, or you can add one to a tamale, along with chili and cheese, creating what’s here known as a Mighty Dog.

That list of Roadfood favorites in Chicago is now a baker’s dozen. 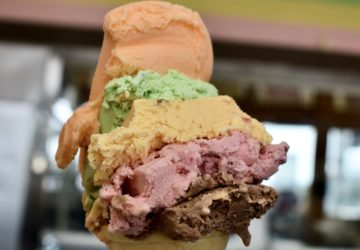