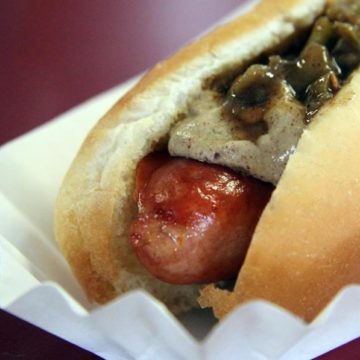 Since it opened in 1928, Blackie’s has become a culinary landmark. Boiled-in-oil hot dogs with pepper-hot relish put it on any must-eat Roadfood map of the Northeast.

The menu offers little beyond hot dogs. Sure, you can eat hamburgers, and they’re fine. You can buy a bag of potato chips, a milk shake or a soft drink. And for dessert, Blackie’s gets ice cream from the estimable Big Dipper nearby. Forget French fries or any other side dish.

What makes these hot dogs so special? Fry-kettle maestros boil big, pink plumpies in oil to the point that they literally blossom with flavor. Their outside surface bursts apart from heat. (Think of the rippers down in New Jersey at Rutt’s Hut.) Servers present the hot dogs plain in ordinary buns

Now comes the magical part of dining at Blackie’s: dressing the dogs. Each customer is tasked with spooning out mustard and relish from ramekins set out along the counter. You want a modest bed of mustard first, applied to the top of each wiener. It provides something for the relish to cling to. This pepper-hot relish sets the dog aglow. It put Blackie’s on the map three-quarters of a century ago, and it remains preeminent. Thick and luxurious, it packs enough heat that lips will glow after lunch. Blackie’s – and its customers – like this formula so much that the kitchen doesn’t even bother to offer sauerkraut or chili.

How To Eat Them

Place an order at the counter. Within a minute or two your hot dogs arrive on a thick disposable plate. If not seated at the counter, customers carry plates and beverages, plus stacks of napkins, into one of the dining rooms. The management appreciates it when people who are done eating toss their debris into the garbage cans provided.

Some of Blackie’s charm owes to its unique twin-barn shape. Two wood-paneled dining rooms flank an open-air counter. It feels like a picnic. But don’t get too excited. A sign on the wall (dating back to who-knows-when) says that dancing is not allowed.

Note that Blackie’s opens every day of the week except Friday. Blackies is the best hotdog stand there ever was !!!! I live in Florida now and I ordered the relish online several times a year is the best relish I tell everybody about it

I feel like the little boy watching the emperor show off his new clothes. We stopped at Blackie’s recently, having passed it many times, and after reading rave reviews.

We ordered a cheeseburger, a hamburger, and two hot dogs. The best I can say is they were edible. The mustard is unremarkable. The relish got mixed reviews: my husband thought it was tolerable, I found it inedible. Our grandson was disappointed he couldn’t get a chili dog or fries. Where was the wonderful food? I’d rather have continued down the road for a hot dog at Costco. I can’t believe the raves about even the bland and flavorless hot dogs.

We will definitely not be stopping here again. A friend asked today if it was worth visiting, and we assured her it was not.

Today I discovered Blackie’s, and tried a couple of their famous hot dogs. Bottom line: the dogs were okay. Ordinary at best.

Blackie’s hot dogs are Hummel’s brand, which is the beginning of the problem for me. I do not like Hummel’s dogs. To me, Hummel’s dogs are everything a hot dog should NOT be. They are soft, squishy, full of air, and textureless. There are no doubt legions of Hummel faithful who can eat tons of these things, but I don’t get it.

One problem with Blackie’s Hummel dogs, and far too many of the other joints in Connecticut that serve them, is the lack of a snappy casing. The hallmarks of a good hot dog are the snap you feel and hear when you bite into one, and the texture of the meat inside the casing. The best dogs in New York (considered the flag-bearing city of the All-American hot dog), such as those found at Nathan’s, Papaya King, and Katz’s, all have a nice snap and texture. Hummel’s dogs have very little texture once you break through the weak skin. There’s virtually no chew, no mouth experience, and a far too mild-mannered taste. It’s a lightweight hot dog with the character of pressed bologna.

Blackie’s relish: the relish I saw had a very unappetizing look. It was a brownish muck that needed way more pickle and/or pepper. It looked like it had been trawled through for most of the solids, leaving behind a soupy brown concoction that didn’t look anything like the images on the Roadfood.com website. In fairness, it didn’t taste bad, but it looked so darn creepy. I didn’t like looking at it on my dog.

The hot dog preparation: Blackie’s serves a dog that splits open from the hot oil it sits in. Honestly, I think it is (or was when Blackie’s first opened) a gimmick. I would prefer it un-split. Hot oil does nothing to enhance the taste. All it does is coat the hot dog with oil. The first two we ordered came out hot, but with hardly any color on them. They may as well have been boiled. We ordered the next two well-done, which improved the texture, look, and taste. But still, it’s a Hummel, which I find ordinary in every way.

Ambiance: classic blue-collar, roadside interior. Nothing unpleasant. Enough decently spaced tables to find a spot to sit, which counts for something when you want to rest along with some personal space.

Service: excellent and fast. Hey, it should be. They only serve hot dogs and hamburgers.

Growing up in Connecticut, I always considered Blackie’s a special treat. 20 years later, while visiting my home during a business trip, I had the opportunity to introduce my co-workers to Blackie’s hot dogs and relish. You can imagine the pride I felt when they immediately decided to make this our daily lunch stop for the two weeks we stayed in Waterbury.

These dogs are not to be missed! Blackie’s unigue style of cooking these natural casing dogs gives them that legendary “snap” when you bite into them. Do not skimp on the stone ground mustard and “secret recipe” pepper relish.

You don’t have to worry about being distracted by a large menu selection. Just walk in, sit at the counter and order the number of dogs you want (I strongly suggest ordering at least three if you don’t want to wait to order a second time). The Hummel Bros. dogs will arrive on a heavy paper plate. Several trays of mustard and relish line the counter to make topping them easier.

You too, will want to make Blackie’s a regular stop on your travels along I-84.

I love roadside stands, and my favorites are those that specialize in hot dogs. I’ve eaten at many of the well known, highly praised stands across the country, as my profession allows me to travel extensively. I think Blackie’s of Cheshire, CT is among the top three nationwide.

They fry their dogs until they split, thus providing more surface area for the dog to support the condiments. The hot dogs are premium and taste great on their own, but don’t miss their legendary relish (which no one person makes in order to protect the family secret). Nothing in this country can compare. The relish is generally green pepper based, but in the summer red peppers are used, resulting in a more reddish color, and a somewhat sweeter taste.

Food presentation is typical of a roadside stand – you get your dogs on a firm paper plate. Order a white birch beer to go with it, or a chocolate milk – that’s the classic Blackie’s way. Blackie’s is known for legendary hot dogs with relish, so if you want to try their cheeseburgers, or anything else, you’re on your own.

I would recommend Blackie’s as a great family outing for anyone that lives within a hundred mile radius – and for anyone traveling to Connecticut who enjoys local establishments. Go to Blackies. I trust that you too will love it!