Nashville is no stranger to food trends. Its unofficial civic dish, hot chicken, has reached fast-food levels of mainstream across the United States. One of the most popular restaurants in town, Biscuit Love, is more known for Nashville’s second most famous dish: biscuits.

Biscuit Love Gulch started as a food truck and is now giant (with two other locations). A modern take on Southern breakfast, it works because it focuses on simply making great biscuits. They aren’t radical or reimagined. They are soft, dense, and buttery, served fresh and warm. Get anything here, but just make sure to get biscuits in as many forms as you can.

The buttermilk fueled bakery makes buttery, fluffy rolled biscuits, drop biscuits and even deep-fried breakfast pastries out of biscuit dough. The most famous sweet snack are Bonuts, which are donut holes rolled in cinnamon and sugar topped with lemon chiffon cream nestled atop blueberry compote. The dough is dense, but fries up with air in it. Its accompaniments are delightful and enrich the donuts without making them too sweet. You could easily share this, or eat it as a main course for a sweet breakfast.

Most of the menu is biscuit sandwiches. The most famous is the East Nasty, a biscuit filled with a boneless Southern-fried chicken thigh and aged cheddar smothered in sausage cream gravy. We’ve had loaded fried chicken and biscuit sandwiches before, and they’re always a satisfying if messy way to start the day. The difference here it that the biscuits are so good that the other elements are distracting. The chicken is tender and fried to perfection, but it doesn’t compare to the biscuit.

The S.E.C. is an upgraded version the classic biscuit breakfast sandwich. Aged white cheddar replaces American cheese, a delicate folded omelet replaces a scoop of scrambled eggs, and the sausage patty is house-smoked. Every element is done nicely, but the biscuits still are the best part. Gravy is the best enhancement. It’s light and herby but has enough sausage to make it a protein component when it’s used. In some bites the flavor of rosemary is distracting, but not so much that it makes us want to stop eating it.

The restaurant is billed as brunch destination. Based on the lines, that is a smart marketing move, but we don’t think of it as that. It’s not homey enough, and there isn’t table service. We see it as more of a great biscuit cafe with such additional features as cocktails and good fried chicken. As a bonus, the here is pretty dang good. 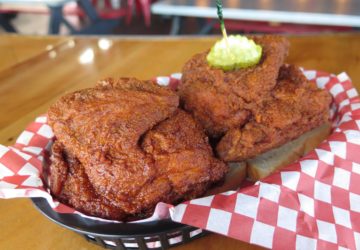 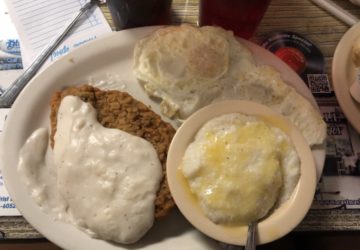