This type of cuisine isn’t mentioned much around here, so I wanted to share some of my recent experiences with it.

I was made vaguely aware of its existence in college, but my interest in it pretty much exploded when I became friends with someone from Egypt.  There is, of course, a lot of overlap.  You’re likely to find several of the same dishes at places that bill themselves as Greek, Turkish, Persian, Lebanese, etc., but there are differences in how those dishes are prepared and in exactly what is available.

Sam’s Gyro in West Hartford is a frequent stop of mine.  Their apparent trademark is stuffing the everloving crap out of their gyros. 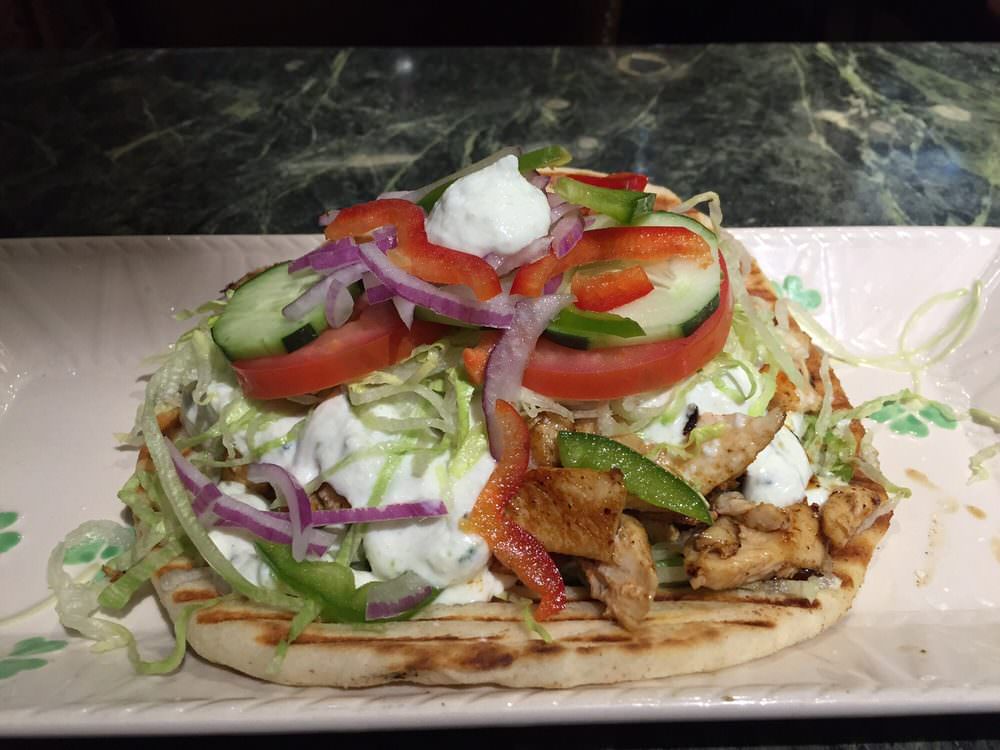 They have a very satisfying “gyro platter” (really a shawarma platter) … 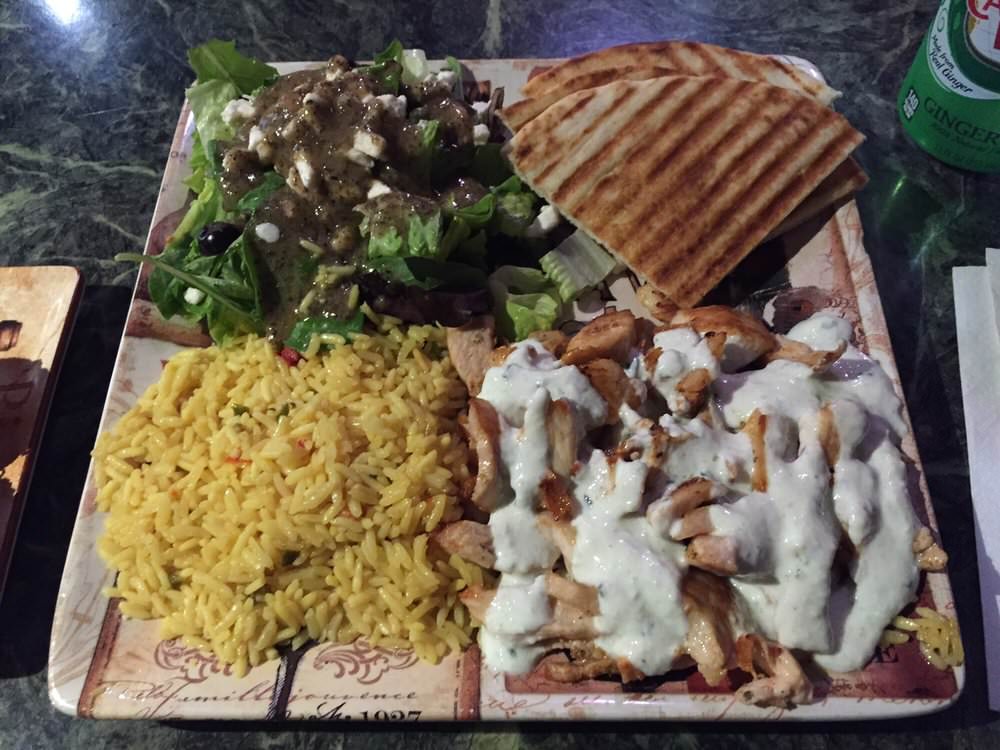 … and their falafel is one of the few I’ve found that lacks the green hue imparted by parsley or other herbs. 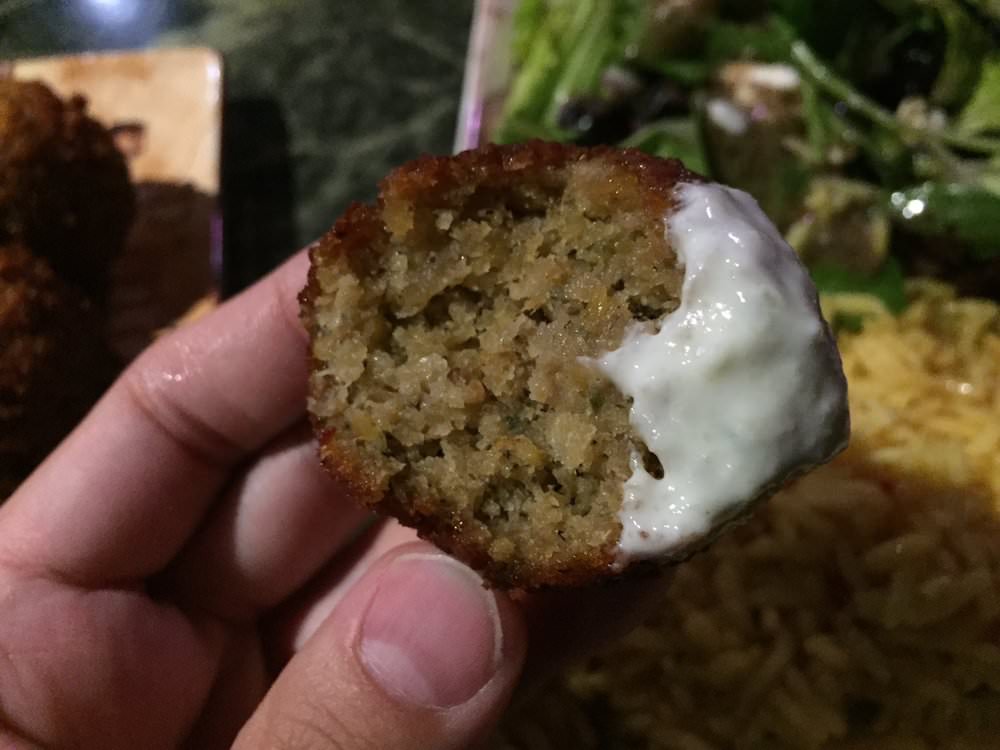 Ali Baba’s Fusion down in Hamden earns the name – their fare runs from Greek to Middle Eastern to Indian.  Decent kabobs, although I question the wisdom of cold salad placed on top of warm rice. 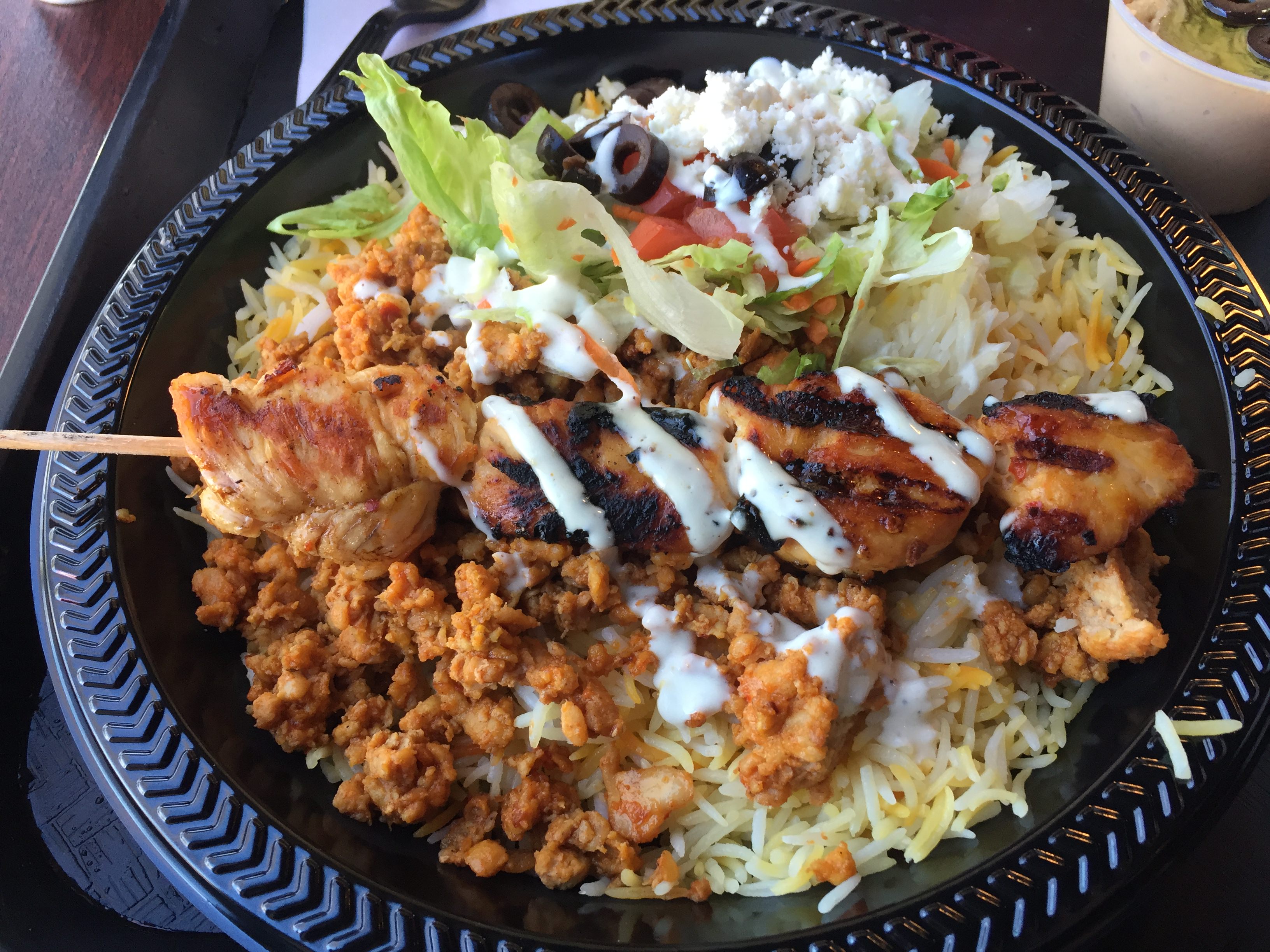 The olives and feta in the salad, as well as the olives in the hummus, are more Greek than Middle Eastern. 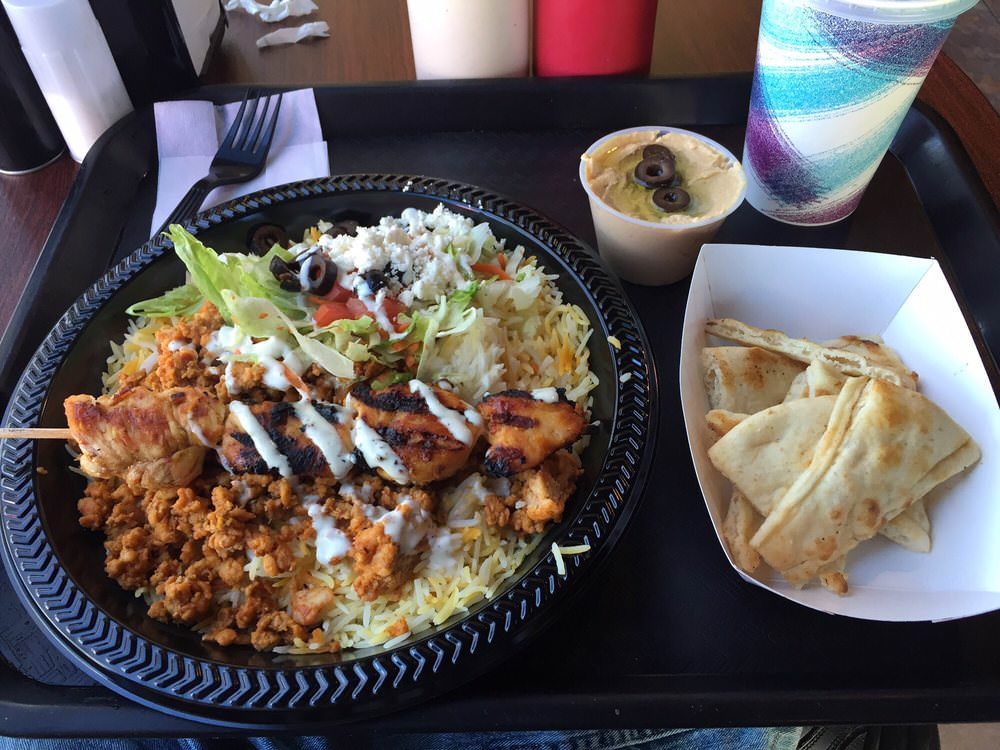 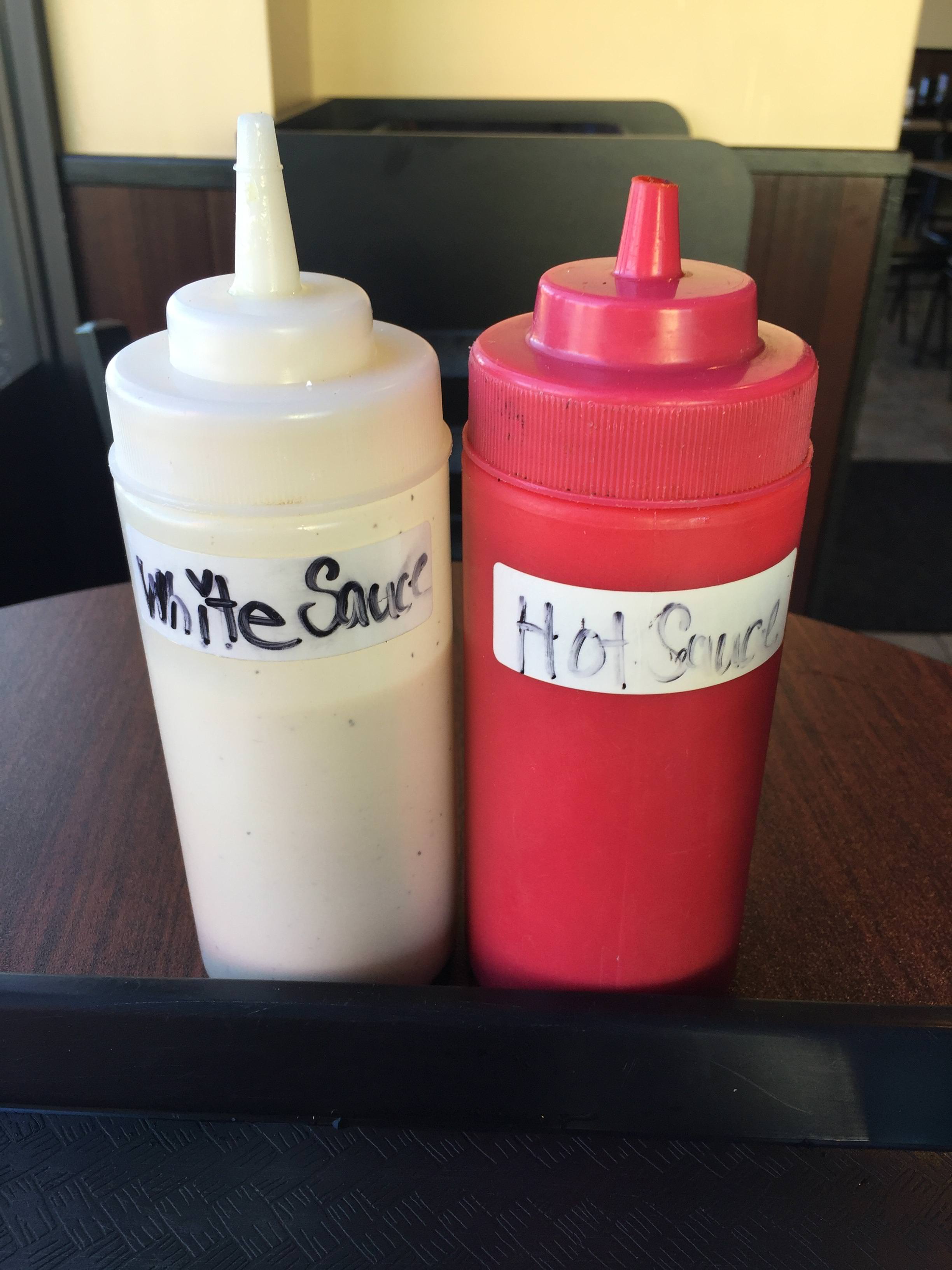 They have a similar “white sauce” and hot sauce to what I saw at The Halal Guys in New Haven (an outpost of the same folks behind the original NYC food carts). 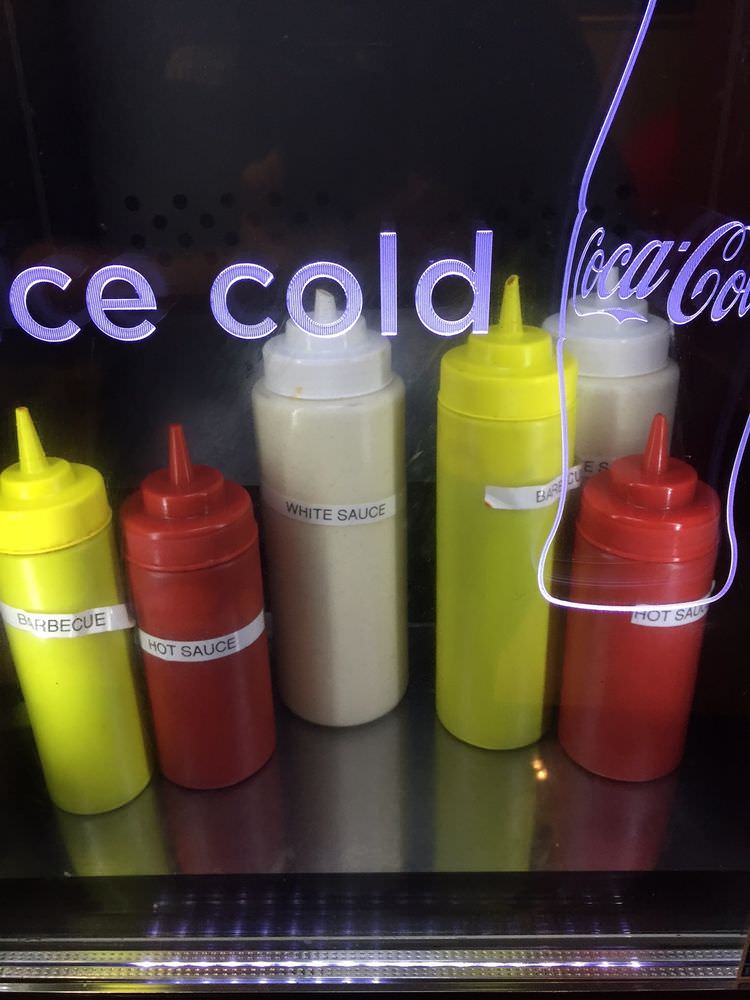 Ali Baba’s white sauce is more traditional, with a yogurt base, while Halal Guys’ is actually a variation on mayo, and the exception to the rule.  You can even see it in the color, lighting notwithstanding.  Here’s a chicken gyro from Halal Guys: 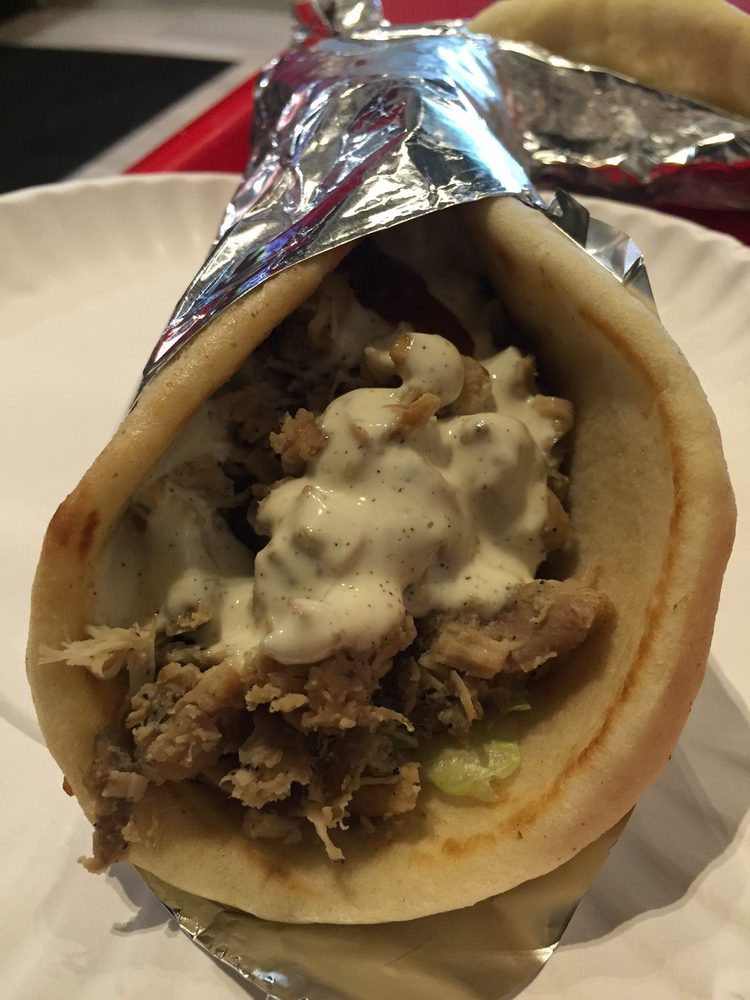 And here’s one from Gyro & Kabob in downtown Hartford: 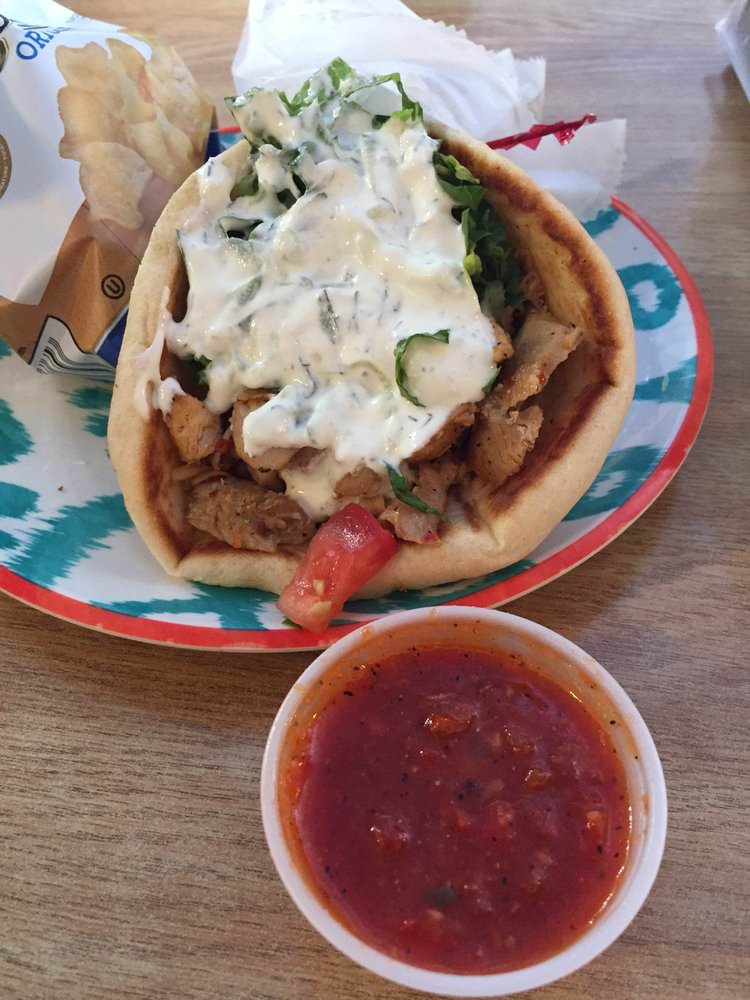 There appears to be an unwritten rule, at least in restaurants around here, that falafel must be arranged in a group of five around a cup of tzatziki.  Sam’s: 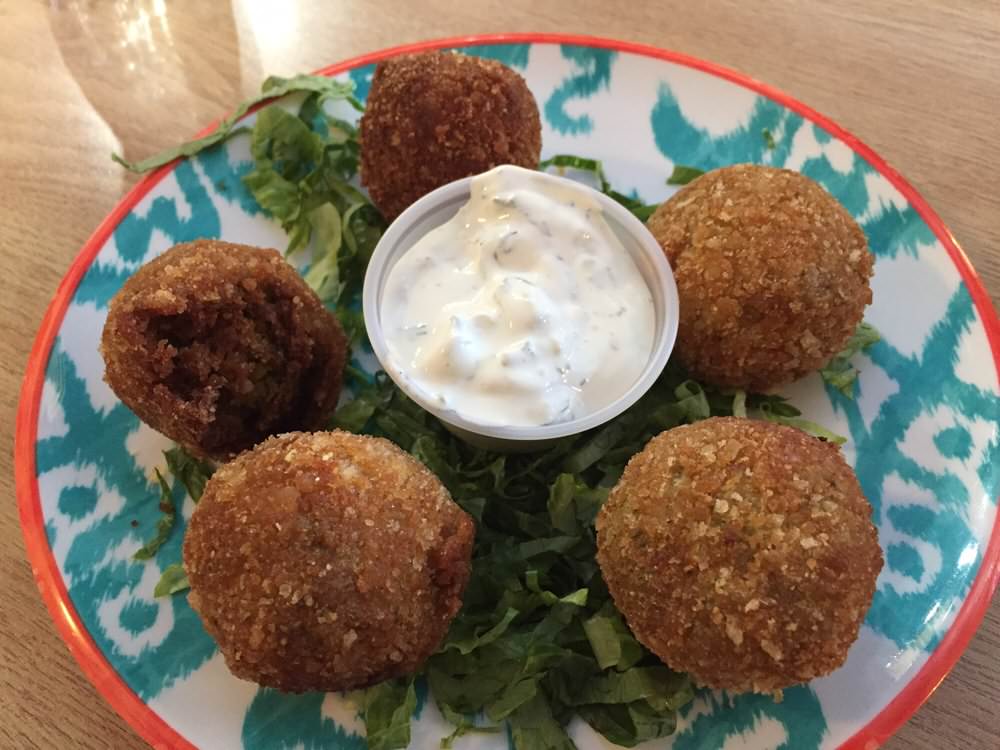 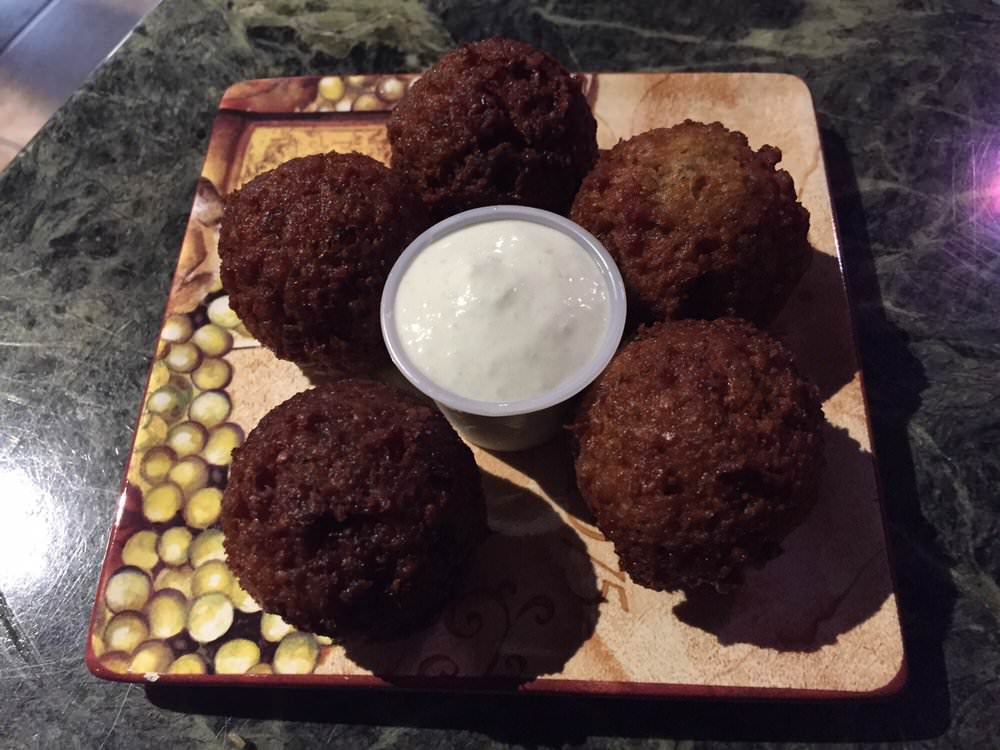 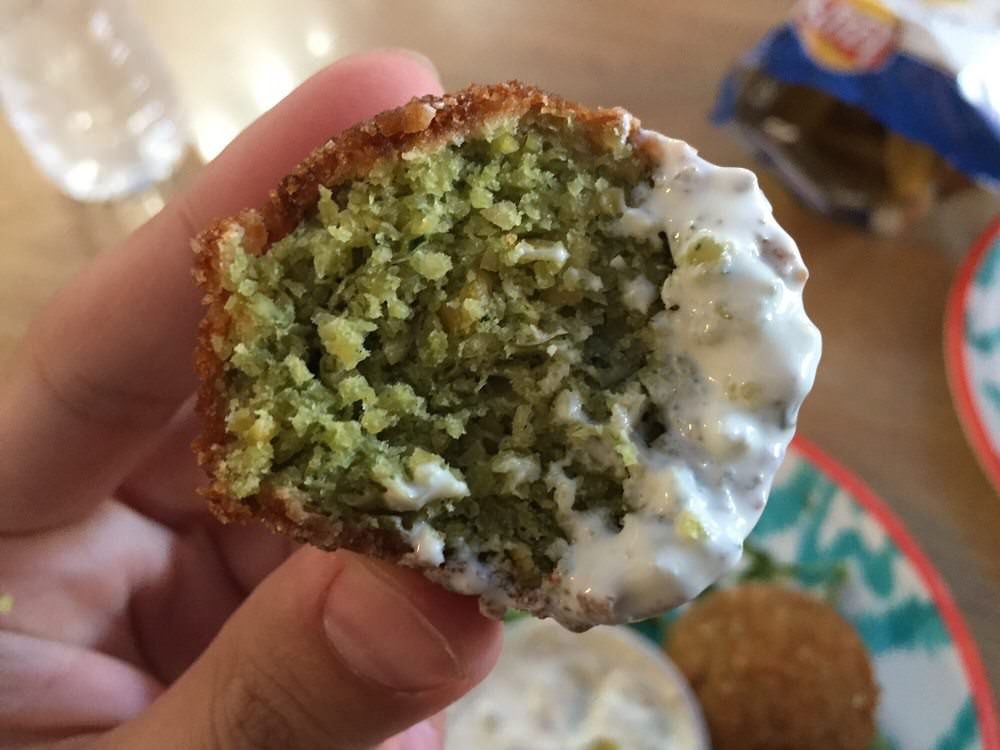 In this post, however, I’d like to spotlight two places in particular.  The first is Kabab Paradise in Lake Hiawatha, New Jersey.  They are Afghani. 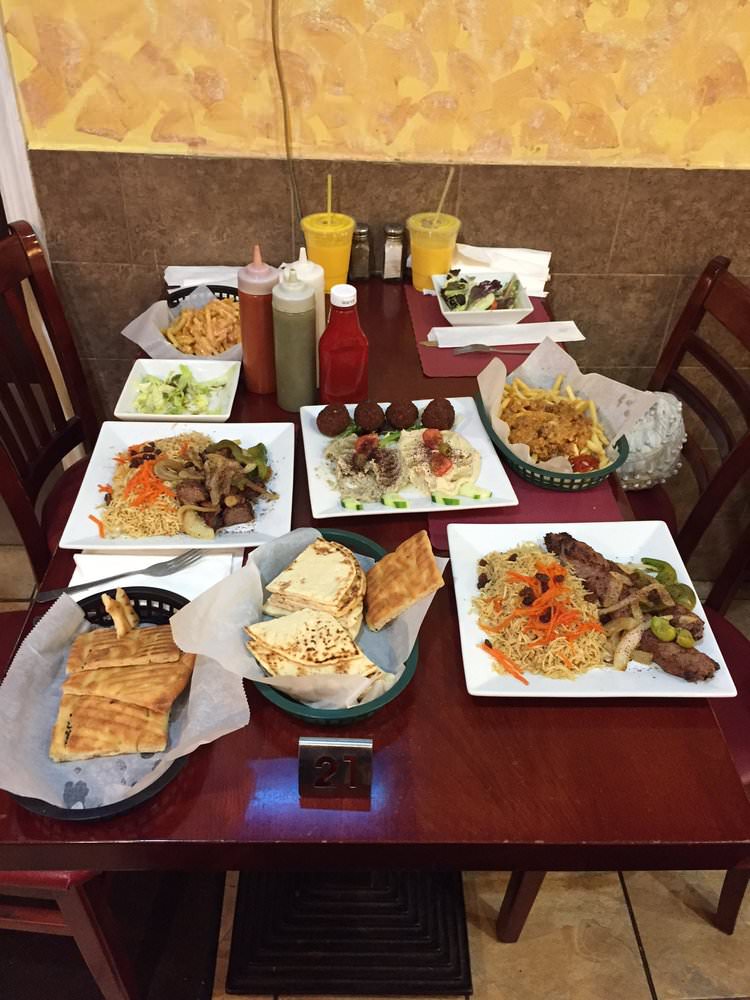 My oh my, did we eat our hearts out.  Not one weak dish in the bunch. 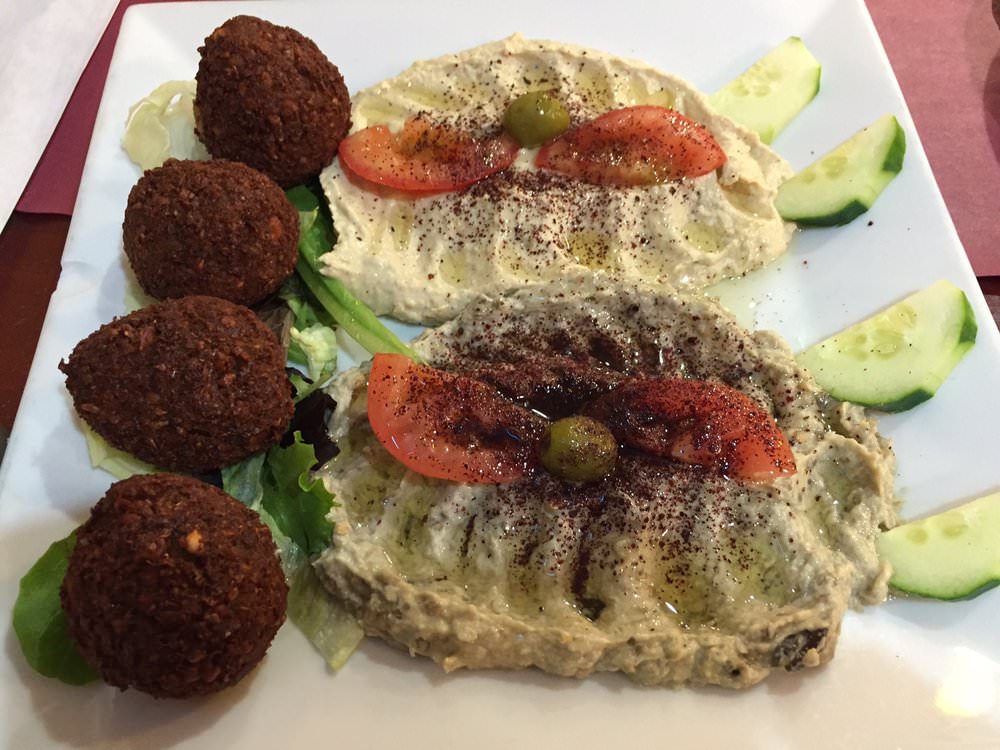 See this rice?  The carrots and raisins, among other ingredients, make it kabuli pulao, an Afghani specialty. 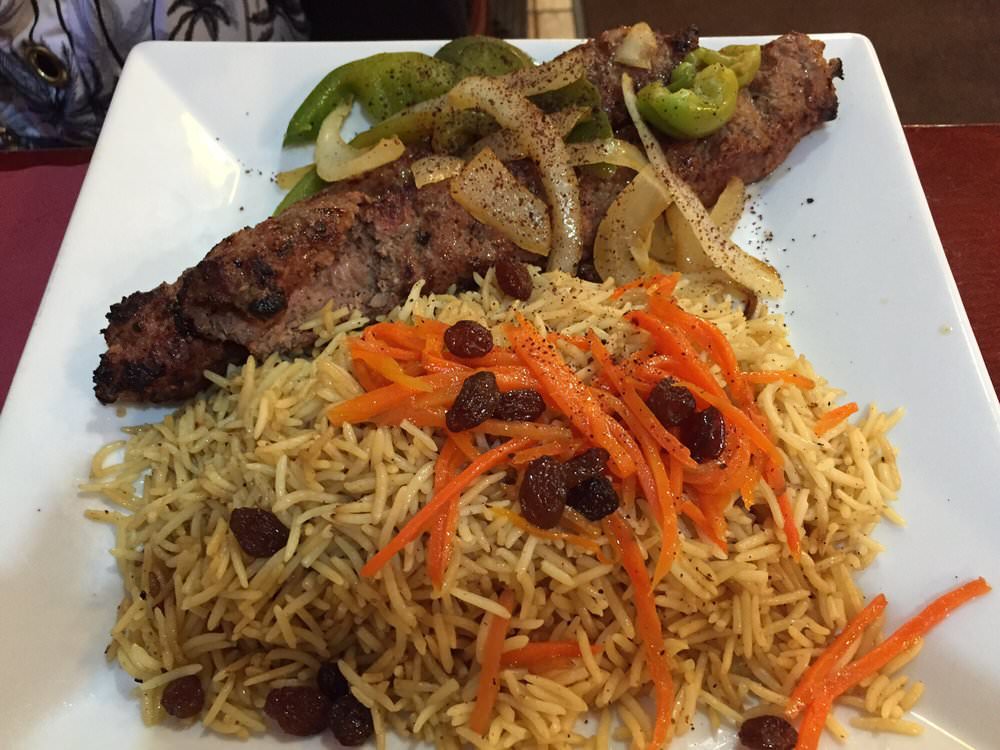 And again we have familiar sauces.  The one on the right is an oil-and-vinegar salad dressing. 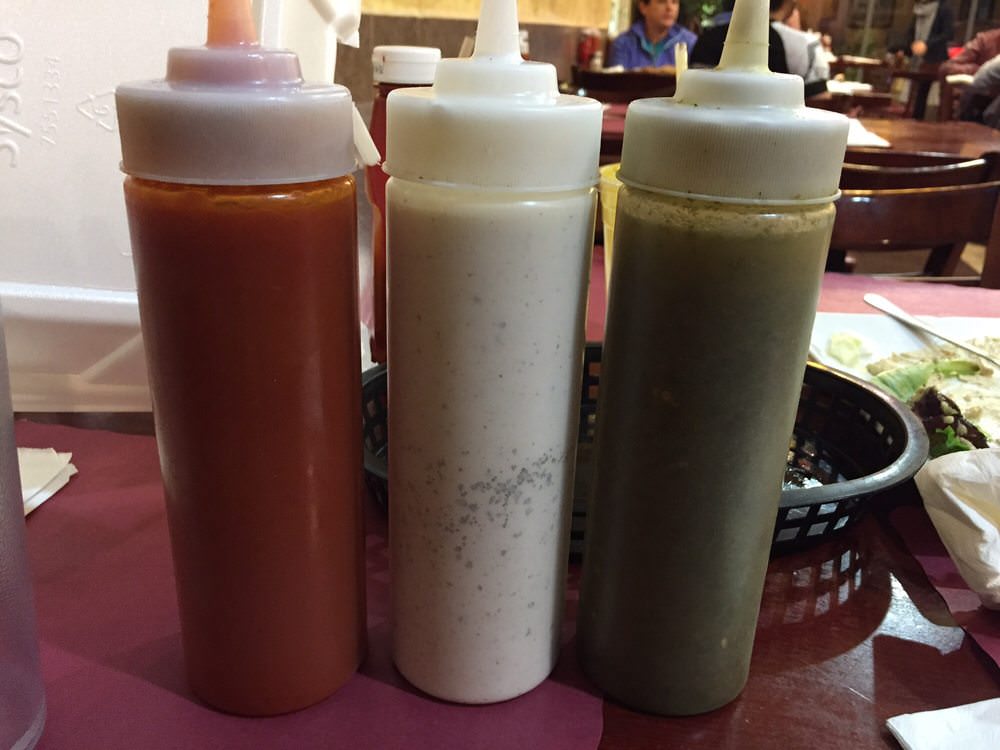 The second is Villa of Lebanon in South Windsor, Connecticut. 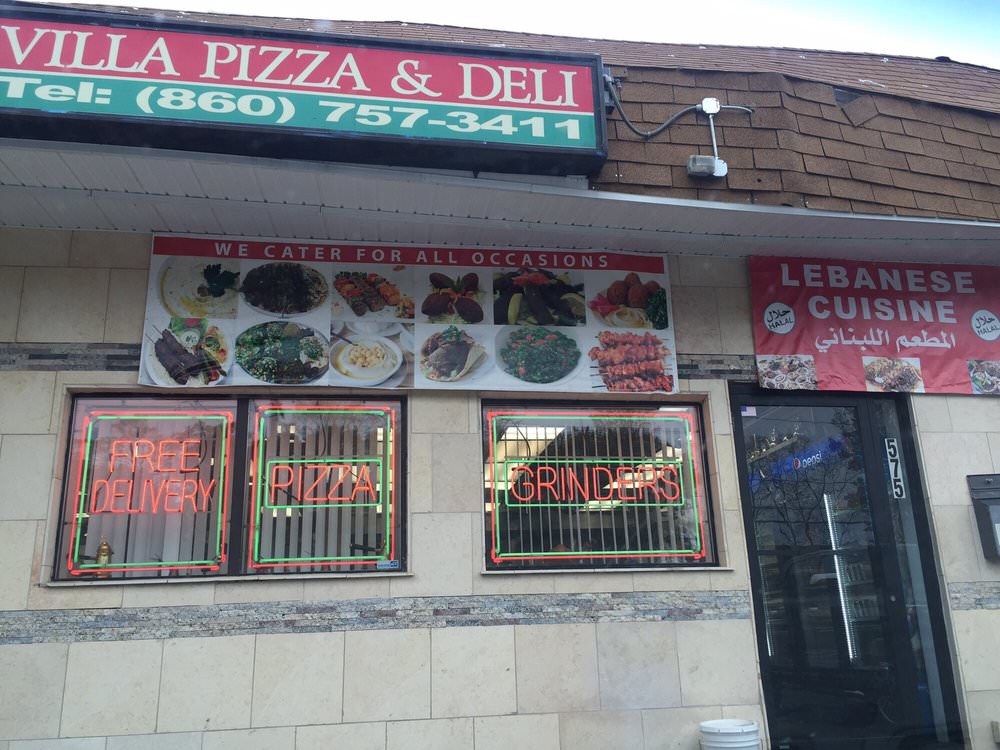 As it happens, the colors of the Lebanese flag are the same as the Italian flag.  Don’t be fooled, though – you don’t come here for chicken parm. 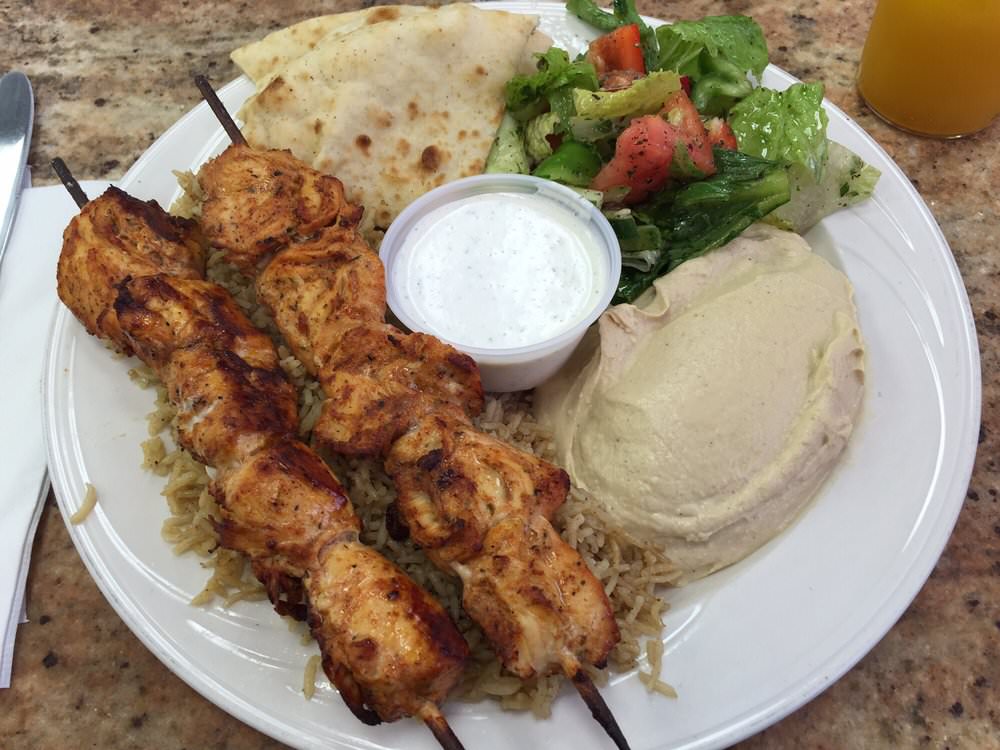