Since it’s now mid-February, that means it is starting to become Mapling season throughout the Northeast and Quebec, and that also means it is time for the annual Au Pied de Cochon (PdC, for short)’s Cabane � Sucre harvest breakfast!  It’s one of the Montreal-area’s toughest reservations (usually involving getting up at midnight on 1 December, cursing at the constantly-crashing website, and then waiting weeks for your callback on the wait list), but it really is worth the trouble, since it’s one of the most amazing culinary experiences.  When we last went in 2014, we had an amazing time.  But there were two lessons we took from that experience: (1) to starve ourselves more beforehand, since it truly is a massively excessive amount of food, and (2) the experience you got as a party of two was just a fraction of the experience the larger, full tables got, since many of the items are best served up table-side (better to receive entire cakes than just slices, for example).  So this time, when they opened up the waitlist in December, I immediately signed up for a table of 8 and got a combination of local and online friends to come up and join me.  Thus, on 18 Feb 2017, we found ourselves again in the outskirts of St Benoit de Mirabel, QC in an enlarged sugar shack, waiting for items to arrive from the kitchen.

When dining at the Cabane � Sucre, it’s important to remember that this really is more of a “feast” than just a large brunch, with the kitchen and dining staff laying siege to your table, hoping to wear out your defenses.  Pretty much from the moment you sit down enjoying a beverage to the moment you wave the surrender flag during dessert, you will be plied with course upon course of food, much of it delivered in impossibly large portions.  There are nominally four courses (an appetizer, a brunch course, the main course, and dessert), plus the optional meat pie, and each of these courses consists of several side dishes, so it’s critical that you pace yourself, and make frequent use of the provided take-out containers, since you’ll want to make sure that by the time the main course arrives, you’ve still got at least a little bit of stomach space reserved to enjoy it.

Before the first course arrived, like always, PdC has made up a list of primarily maple-themed cocktails available for your enjoyment during the meal, and this year was no exception.  About half of our table ended up with the Maple Negroni, a pleasant variation on the standard Negroni using PdC’s own gin, sweetened up just a bit with some maple syrup, and served in a glass with… a maple leaf.  I rather enjoyed it, with the maple combining nicely with the vermouth and gin to make a well-rounded citrusy experience.  Other drinks enjoyed at the table included a hipster-ish Orange Julep with maple served up in a can (those experienced with PdC know that he likes to do interesting things in cans, so it’s a bit of an inside joke), and another maple and watermelon-based cocktail served up for two in a hollowed-out half watermelon (since nothing says “Winter in Quebec” like a tropical-drink-like watermelon!). 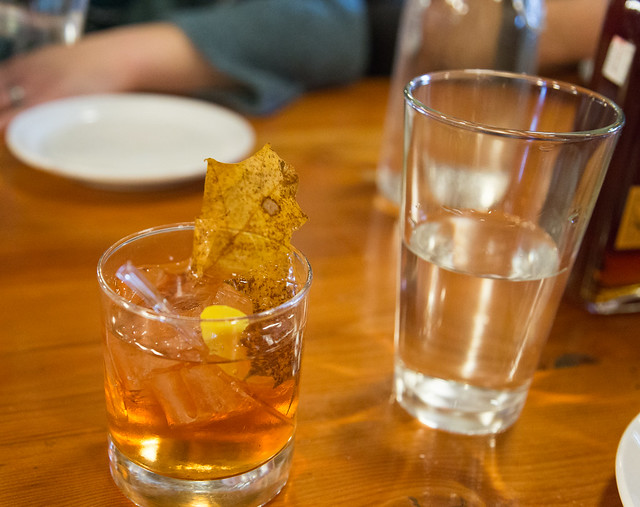 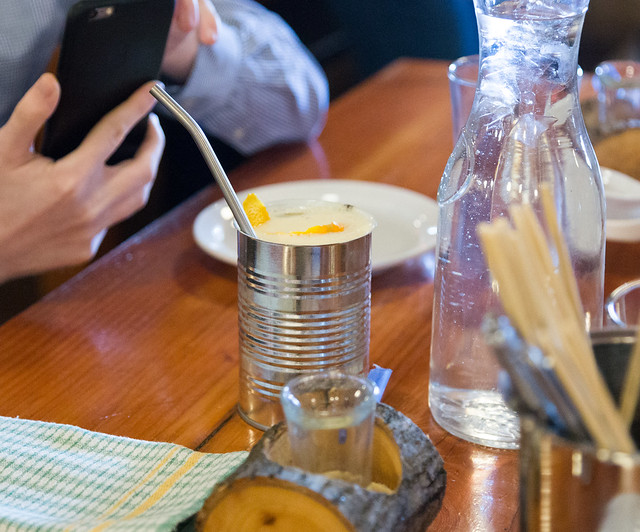