Rochester, New York, has a thriving branch of infamous Dinosaur BBQ; it is home to one of the most amazing (and least expensive) steak sandwiches anywhere, at LDR Char Pit, as well as to Don’s Original, where western New York’s hot dog culture reigns. Its signature dish is the Garbage Plate, created at Nick Tahou Hots, which trademarked the name. (Other restaurants that serve something similar have named it the Dumpster Plate, Trash Plate, Messy Plate, Sloppy Plate, or Rubbish Plate.) Beyond its garbage plate and Texas hots (chili dogs), Nick Tahou is worth visiting for a heartening taste of the city. To local citizens, it is more than a restaurant. It is a gathering place and symbol of community togetherness. 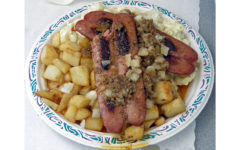 New York Road Trip: Watertown to Niagara Falls This tour will take you on a five and a half hour drive along America’s Great Lakes Seaway Trail. Beginning in Watertown,... Texas Hots in New York Texas hots do not exist in Texas. Unique to New York, New Jersey, and Connecticut, the curiously addictive franks were first created a century ago... The only possible happy exclamation incited by corned beef hash spooned from a can is "Arf!" But freshly chopped and sizzled to a crisp, crowned with poached eggs eager... Of the many eating tours Roadfood.com has sponsored to delicious destinations around the U.S., one of the happiest was a restaurant crawl through Rochester and Buffalo, New York. Here...