What To Eat in Maine

Lobster shore dinners, lobster rolls, lobster pie, lobster bisque, and lobster stew are stars of the Maine shoreline, but there’s so much more to the Pine Tree State. New England boiled corned beef dinners are a treat in many diners, which make leftovers into red flannel hash. Muffins are the favored morning breadstuff inland and along the coast. Up north along the International Boundary look for the buckwheat pancakes known as ployes, and for Yankee variations of Quebec’s French-fry and cheese curd favorite, poutine. Lobster stew is a Sea Basket best-of-Maine dish. Clam chowder is also excellent, as are baskets of fried shrimp, clams, and haddock at this happy roadside café. Clam Shack fried clams are great; lobster rolls are even more impressive, so huge and fresh. Al fresco dining only at this Kennebunk landmark.. Bite into Maine offers lobster rolls assembled with obsessive detail. It's a truck that parks at some of the Portland area’s most attractive locations. A small corner restaurant that's been a favorite among Maine diner fans for over a century. Bright pink dogs put Simones' on the Roadfood map. Rock's has been Fort Kent's three-meal-a-day town diner since 1945 -- a northern Maine destination for burgers, fries and homemade whoopie pies. 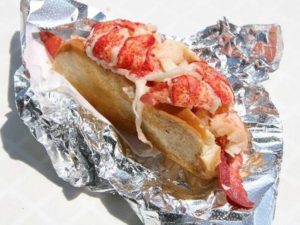 Pilgrims come to Red's Eats, a Wiscasset, Maine, Roadfood landmark drive-in restaurant, and wait in line to savor what may be the best lobster roll anywhere. Resilient lobsters fairly burst out of their shell when squeezed with a nutcracker at the unbelievably scenic picnic tables of Maine's Five Islands Lobster Co.