You can eat your way around the world in Los Angeles, but what are its signature dishes and which are the restaurants that are L.A.’s alone? To the Roadfood devotee, an eating tour of the city would have to include a French Dip sandwich at Philippe’s the Original, a burger and banana cream pie at the Apple Pan, fried chicken dinner at the do-wop classic coffee shop Pann’s, a stack of pancakes at 24/7 Du-Par’s in the Farmer’s Market, flannel cakes at Musso & Frank in Hollywood, matzoh ball soup at Canter’s deli, a corned beef sandwich at Langer’s, good old-style Mexican-American fare at El Tepeyac Cafe, burritos at Al & Bea’s, and a brace of chili dogs at Pink’s. You also need a hamburger — at one time, southern California was America’s Burger Central — and while the original Cassell’s Hamburgers closed a few years back, it is now reborn, and the burgers might be better than ever. When Los Angeles was young at heart, cafeterias were stylish. They had first appeared in several American cities around the turn of the century; but by the mid-1920s there... 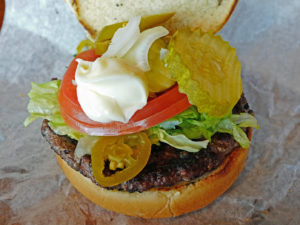 While magnificent scenery along Route 66 in Arizona and California is abundant, good meals can be scarce. But it isn't necessary to take a major detour down to Sedona... Making the drive from L.A. to Palm Springs? Here's where to find the best local, authentic eats along the way, plus where to go once you arrive. The Best Restaurants on the Beach from Malibu to Los Angeles

Un-fussy California Fare from Malibu to Santa Monica While Malibu is an upscale place, there are still opportunities to experience casual California beach eats at their best. Try some breakfast... The 12 Best Locations for Breakfast in the West

As breathtaking as a western sunset is, western breakfast can be every bit as beautiful. Sunrise never tasted better than it does at any one of these dozen eateries... At their best, made from roasted chilies that still have muscular vegetable walls, stuffed with cream-rich molten cheese and haloed in a coat of featherweight batter fried to a... If you visit Los Angeles from the East and have a stubborn circadian rhythm governor that has you awake and hungry in the middle of the night, prepare to...