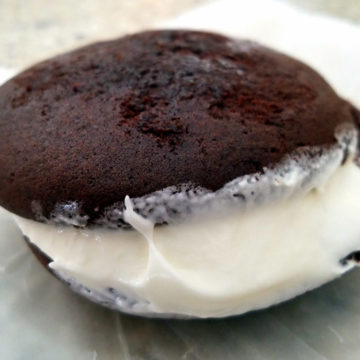 A whoopie pie is two soft disks of dark chocolate cake with a layer of sugary white crème (not cream) or Marshmallow Fluff in between – like a large, squishy Oreo cookie. It has become known throughout much of the United States, but for many years it was unique to the Downeast coast and Pennsylvania Dutch country – each of which is credited with its origin. Not always chocolate, the cake circles of a whoopie pie might also be red velvet, gingerbread, or pumpkin; and fillings can be mint-flavored, coconut-speckled, or peanut buttery. One Response to “Whoopie Pie”

I came upon the Whoopie Pie in Tucson, Arizona and it is sooo good, one was never enough. Had to have Whoopies everyday and looked forward to having them on my next trip there. Can’t find them in my area.