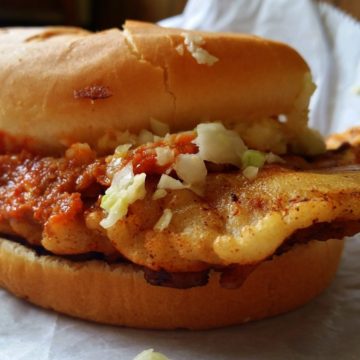 Around the nation, pork is sandwiched in multiple ways: as a pork chop (preferably boned, but sometimes not), as pork roll, as a disc of fried pork tenderloin, as pulled pork BBQ. Montana says it invented the pork chop sandwich (at a restaurant called Pork Chop John’s in Butte), but it reached its apotheosis at Snappy Lunch in North Carolina. Located in Mount Airy, the town where Andy Griffith grew up and was inspired to create the fictional paradise of Mayberry, Snappy Lunch remains a town fixture, located next to the barber shop that was the model for Floyd’s in the 1960s TV show. Snappy Lunch’s pork chop sandwich is an American treasure: a boneless chop dipped in sweet-milk batter and fried until golden crisp. The cutlet itself is soft and porky in some areas, crunchy in others where the meat is just a thin ribbon and the batter is a thick, savory coat. Too broad for bread or roll, the fried chop is nonetheless sandwiched in a bun along with a battery of condiments: sliced tomato, chopped onion, mustard, finely-chopped cole slaw, and a kaleidoscopic chili made from ground pork, ham, sausage, hamburger, tomato, and spice. Served in booths or at the counter with no plate but with a wax paper wrapper that serves as a holding place for fallen condiments, a Snappy Lunch pork chop sandwich requires two hands to hoist and eat. Dainty eaters use the plastic knife and fork provided to cut the sandwich in half; but even half is inevitably messy. There are no side dishes other than a bag of potato chips; and the beverage of choice is tea – iced and pre-sweetened, of course.