An Italian sub is a length of muscular bread split open and filled with cappicola, salami, and provolone, chopped iceberg lettuce, sliced tomatoes, and raw onions, a good drizzle of oil, and – optionally – roasted peppers, either sweet or fiery long hots. Many sandwich shops refer to this combination of ingredients as an Italian Special. In Philadelphia, the configuration is known as a hoagie, supposedly named for Italian workers at the city’s shipyard, known as Hog Island during the first World War, who brought bunned lunches that became known as Hog Island sandwiches. The term eventually morphed into hoagie. Around Portland, Maine, the sandwich called a “Real Italian” is a unique variation, built in such a way that it is virtually impossible to fold the loaf over into a customary torpedo sandwich shape once it has been constructed. Slices of meat and cheese span both halves of the split loaf, as do thick slices of firm tomato and green bell pepper. Once meats, cheeses, tomatoes, peppers, pickles, onions, and olives are all spread out, the Italian is spritzed with a significant amount of olive oil, which makes even tilting it a precarious event. Real Italians are wrapped unfolded in butcher paper. So, while technically speaking a Real Italian is a sandwich – if sandwich means something paired with bread – it is not surprising to find Portland deli menus that list Italians separately from cold sandwiches and hot sandwiches. 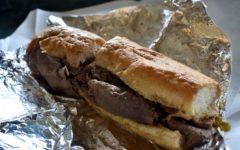